Hactl and AAT both reported a slight pick up in demand in Sep-2009, although a full recovery appears to still be some time away. Key to the recovery will be whether Hong Kong's cargo volumes move up significantly in the pre-Christmas period, after last year's disappointment. Hong Kong Air Cargo Terminals Limited (HACTL) is optimistic, stating, “we expect further tonnage improvement, hopefully in a pre-Christmas peak.”

HACTL saw Sep-2009 tonnage further stabilise, with a total of 212,391 tonnes handled, for a milder drop of 4.3% year-on-year. However, it should be noted that air cargo volumes started to decline in Jul-2008, so contractions are now compounding.

Tonnage performance in 3Q2009 also showed “clear improvement” compared to second quarter levels, with reductions much milder than the cumulative year-to-date reduction of 16.3%. 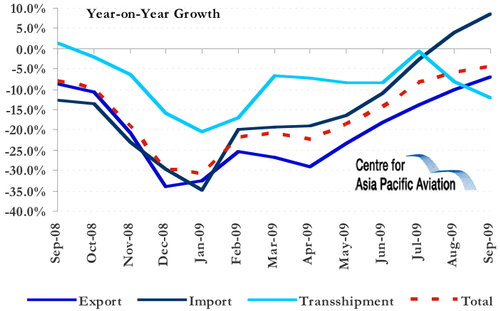 HACTL’s smaller rival, Asia Airfreight Terminal Co Ltd (AAT), handled 47,182 tonnes of cargo in Sep-2009, a 12% year-on-year contraction but a 9% month-on-month improvement, with export cargo decreasing 11% year-on-year and import volume down 15%. Transhipment cargo volume was up 9% year-on-year (but down 30% month-on-month), although off a small base, to 330 tonnes. 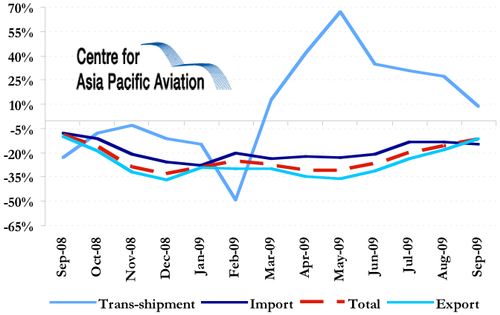 HACTL and AAT are still feeling the impact of the global economic downturn, in addition to the impact on the Hong Kong hub from cross-Strait liberalisation and the shift of manufacturing to coastal cities in Mainland China. These cities enjoy increasing direct freight services, particularly from integrators like FedEx which has established its intra-Asia hub at Hong Kong's Pearl River Delta rival, Guangzhou Airport.

Despite these rising pressures, Hong Kong's freight handlers are increasingly hopeful of a better performance in the lead up to holiday season, as the global economy starts to show signs of traction.