Hochtief rises as it exceeds 2009 targets; Vienna profits down, but more optimistic for 2010

Shares in German engineering and construction giant (and airport investor) Hochtief led the way up yesterday, jumping 4.8% upon the release of the company’s financial report for the 12 months ended 31-Dec-2009 Chairman of the Hochtief Executive Board informed the company “attained or exceeded” all targets it had set. Hochtief reported a consolidated net profit increase of 24.5% year-on-year to EUR195.2 million.

Based on its performance, the Hochtief Executive Board and the Supervisory Board plan to submit a proposal to pay a dividend of EUR1.50 per no-par-value share. This would represent an increase in dividend by approximately 14% p/a since 2005. Hochtief reports its stock performed above average, with the stock price rising by EUR17.81 (49.8%) over the course of the year to close at EUR53.55.

HOCHTIEF Concessions further augmented its portfolio in fiscal 2009 and again contributed "significantly" with its earnings to the group. The net present value of the concessions portfolio - airports, roads and social infrastructure - reached a total of EUR1,596.4 million as of 31-Dec-2009, an increase of more than 8% year-on-year. Despite the financial crisis, total traffic at the company’s six airport holdings was only 1.4% down on the prior-year comparable figure, at 88.7 million passengers in 2009. Alongside the six airports, HOCHTIEF Concessions was involved as of the year-end in a total of 27 projects (roads, tunnels, public-sector facilities and geothermal power plants) with a total value of well over EUR6 billion.

The Group anticipates only a slow recovery in FY2010, with sales to remain on par with 2009, while profit, both before tax and net, are expected to rise above 2009. In the medium term, Hochtief is targeting a profit before tax of EUR1,000 million.

Meanwhile, Austria’s Flughafen Wien Group, operator of Vienna Airport, is optimistic for the year ahead after a difficult 2009.

For 2010, the operator expects an improvement in earnings based on a modest traffic increase, thus a rise in tariff income. While aircraft movements at Vienna Airport are expected to remain stable on the 2009 level, passenger numbers are expected to increase by 2.0% this year. Shares in the company closed 0.3% higher yesterday.

The full financial/traffic reports for Hochtief and Flughafen Wien Group are contained in today’s edition of Airport Business Daily. 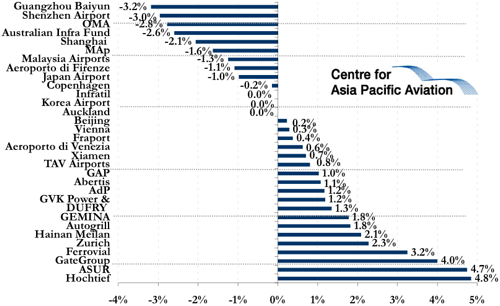