European airline shares were down heavily again on Friday as a result of the double-whammy impact of the sovereign debt crisis and further volcanic ash-related air space closures.

Eurocontrol stated on Friday that volcanic ash from Iceland was “substantially” affecting European airspace, especially airports in Portugal, Spain and Italy. Around 500 fewer flights took to the skies. The situation improved over the weekend, with most airspace reopening.

UK air navigation services provider, NATS, stated on late Sunday evening that the “high density area of the volcanic ash cloud is now lying to the north-west of the UK and, as a result, there are currently no restrictions within UK airspace apart from an area in north-west Scotland affecting Barra airfield”.

SAS (-3.0%) reported it had carried 1.6 million passengers in Apr-2010, a 28.1% year-on-year reduction, and the carrier expects yields to fall. SAS noted it was too early to assess the impact on May and June traffic, although bookings are “almost back to normal”. The airline estimates the impact on earnings up to 07-May-2010 to be SEK650-700 million (USD90-97 million). 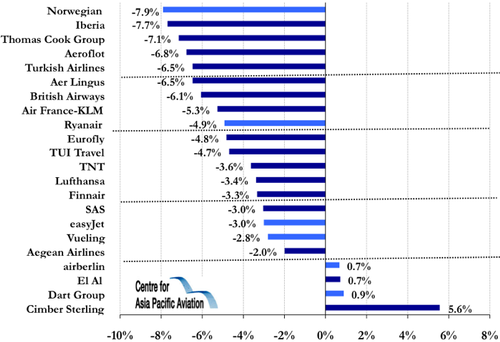