North and South American airline shares declined on Tuesday (07-Sep-2010), as investors looked to sell airline stock as the carriers move into the autumn low season. Stocks were also down in the wider market, with the Dow ending trading flat on European banking concerns.

In Canada, Air Canada (+2.2%) and WestJet (+0.2%) were among the few gainers for the day, after also reporting their traffic results.

Air Canada load factor was flat at 86.8% for the month. Latin American and Pacific loads were the most improved, up 2.4 ppts and 1.8 ppts, to 86.8% and 91.1%, respectively. US trans-border, Atlantic and Canadian loads were all down.

The carrier added that it expects a "positive increase" in revenue per ASK (RASK) in the current quarter. 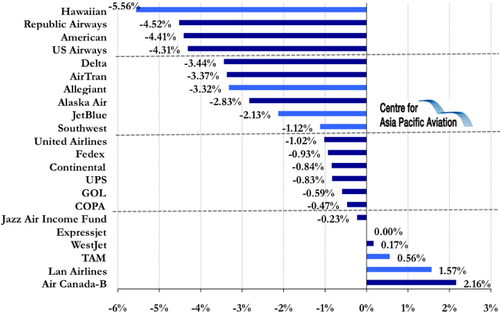