The majority of North and South American carriers saw a rise in stock prices on Tuesday (06-Oct-09), on the back of positive Sep-2009 traffic reports from the day prior and a rise in the wider market, with the Dow (+1.4%) ending trading up.

Hawaiian Airlines (+5.1%) led the gainers, as Jesup & Lamont reiterated early in trading its “buy” rating on the stock, following its 8.1% increase in traffic in Sep-2009. Hawaiian increased capacity by 3.1% last month.

Air Canada enters into agreement for sale of shares

Air Canada (+2.2%) meanwhile announced late in trading it has entered into an agreement with a syndicate of underwriters led by Genuity Capital Markets and TD Securities Inc to purchase 160.5 million units from Air Canada at a per unit price of CAD1.62 (USD1.53) for aggregate gross proceeds of CAD260 million (USD245 million). Each unit is to be comprised of one Class B Voting Share or one Class A Variable Voting Share and one-half of one share purchase warrant.

United Airlines (1.2%) ended the day down, despite positive analyst comments the day prior. The carrier announced on Tuesday it has priced its public offering of enhanced equipment trust certificates (EETC), to refinance an existing EETC facility that covers a number of the airline’s aircraft. The USD659 million financing has an interest rate of 10.40% and a final expected distribution date of 01-Nov-2016. 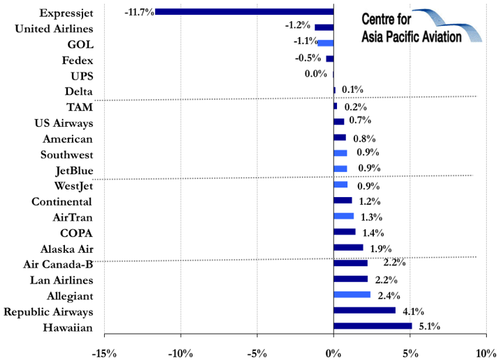