Hawaiian Airlines rises after positive 2Q2009 results; AirTran up; US Airways put on watch for downg

Some of the shine was taken off US Airways’ steep rise on Friday, however, when Standard and Poor’s expressed concerns over the carrier’s liquidity (see below). 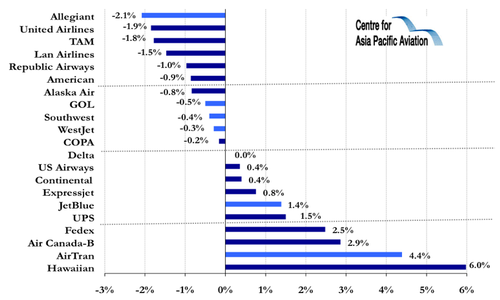 Meanwhile, United Airlines (-1.9%) fell again, after rising 10.2% the previous day. United’s shares have been trending downwards over the past three months, from above USD6.00 on 04-May-09 to USD3.72 at present.

United Airlines shares: May-09 to present 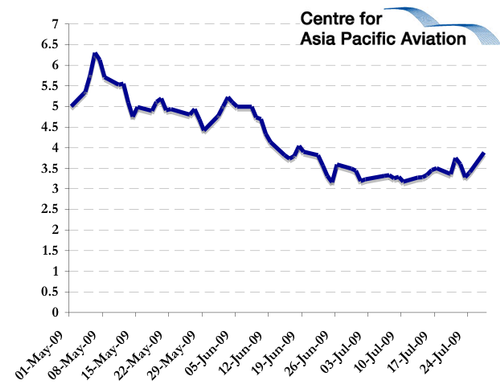 Hawaiian Holdings (+6.0%) reported a USD27.4 million net profit for 2Q2009, a decline of 49.3% year-on-year. However, its net income for 1H2009 was USD51 million, up 50% year-on-year. Hawaiian attributed its performance to lower fuel prices, offset by much lower demand, as a result of the global financial downturn. However, it noted, higher fuel prices and lower fares in the upcoming months may lead to a more negative performance for the remainder of the year. Hawaiian’s shares over the past three months have been steadily improving, from USD5.50 on 04-May-09 to the current USD7.00.

US Airways on watch for downgrade by Standard and Poor’s

Standard & Poor's Ratings Services announced yesterday it has placed US Airways (0.4%) on watch for downgrade. The carrier is currently rated B-. S&P stated the agency will look into US Airways liquidity, including further efforts to raise cash through new financings. The carrier raised USD234 million in 2Q2009 and finalised USD700 million in financing 24 out of 25 new aircraft to be delivered this year.