Hawaiian Airlines (+4.0%) stocks rose on Monday (13-Dec-2010), despite the majority of North and South American airlines ending the day lower. The carrier rose after announcing it has completed a successful renegotiation of lending agreements that addresses upcoming term loan maturities, provides for an expanded revolving line of credit, and puts the carrier in a strong position for future growth.

In connection with entering into the amended lending agreements, Hawaiian has repaid term loans that would have matured in 2011, strengthening the company's balance sheet as it continues to pursue new expansion opportunities. In addition, Hawaiian has secured an expanded revolving line of credit that allows for the borrowing of up to USD75 million over a four-year period, against a borrowing base of the company's account receivables, ground equipment, spare engines and certain aircraft.

Elsewhere, GOL was flat at the end of trading, but rose earlier in the day after Santander analysts stated the LCC’s Nov-2010 traffic indicates improving profits. The carrier reported a 5.4% rise in passenger traffic (RPKs) for Nov-2010 last week. LAN Airlines (+0.5%) and TAM (+0.1%) also made marginal gains. 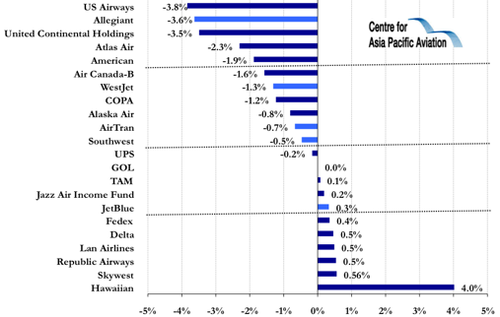