United Continental Holdings (+3.0%) also rose after United Airlines reported improved traffic results for Sep-2010. The carrier’s load factor was up 2.5 ppts for the month to 83.7%. The gain was on the back of a 6.4 ppt improvement in Asia Pacific loads and a 5.3 ppt rise in Latin America loads. Passenger numbers were up 7.6% for the period to 6.8 million.

In other United Continental Holdings news, the carrier concluded an MoU with Air Canada setting out the principles for a revenue-sharing joint venture that would provide for an enhanced partnership on US-Canada services, and generate substantial service and pricing benefits for consumers travelling between the two countries. The joint venture is expected to come into effect in early 2011, subject to Air Canada and United making the necessary filings and obtaining regulatory approval. The carriers already benefit from antitrust immunity granted by the Department of Transportation.

Southwest Airlines (-0.5%) meanwhile slipped despite reporting a 11% increase in passenger RASM for Sep-2010. Load factor for the month was up only slightly, increasing 0.3 ppts, to 75%. Revenue passenger numbers were up 2.2% for the period, to 6.9 million. 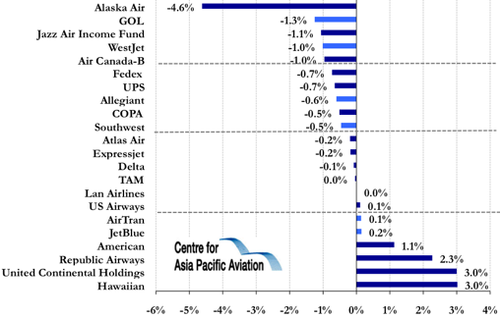