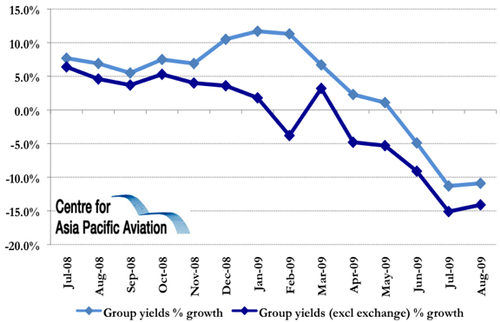 But it is probably to early to call a bottoming to the current yield cycle, as Air New Zealand's long-haul yields continued to take a hammering last month falling 13.5%, following Jul-2009’s 11.9% contraction.

Short-haul yields remain under pressure following Jetstar’s entry in the domestic market, falling 12.3% last month - slightly better than the 13.1% contraction in Jul-2009 and 10.5% reduction in Jun-2009. 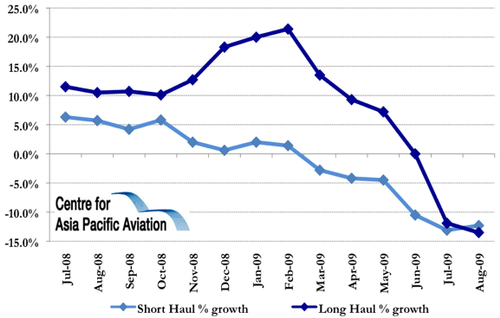 In more positive news, Air New Zealand’s load factors were up in the month, gaining 2.4 ppts, as the carrier reduced capacity (ASKs) by 13.4%. This is an improvement from Jul-2009, in which the carrier experienced a double blow of sharp yield contractions and declining load factors.

The carrier reduced capacity on Asia/Japan/UK routes by 24.0% to enable load factors to remain stable at 79.6% despite a 24.1% reduction in demand. Load factors on North America/UK routes were also in line with 2008 levels, with demand down 8.6% on a 7.9% capacity contraction.

Tasman/Pacific capacity was also reduced by 14.5% in the month, primarily through downsizing to smaller aircraft and the withdrawal of trans-Tasman flights from Hamilton and Dunedin, which contributed to the load factor increasing by 6.5 ppts.

Jetstar continues to maintain that it has an "active pursuit” of future growth options within the New Zealand market and has plans to rapidly expand its New Zealand presence, moving more A320s into the domestic market.

Also this week, Qantas received the group's 75th B737NG in Auckland, which will serve trans-Tasman routes between New Zealand and Australia (specifically Auckland-Sydney and Auckland-Melbourne services).

The carrier will be adding six of the aircraft, the first three before the end of this year, to its trans-Tasman fleet over the next two years. The new aircraft will each be able to carry approximately 10% more passengers.

If Pacific Blue does move to E190 New Zealand services, the carrier would target regional markets, which are currently some of Air New Zealand’s most profitable routes.

Air New Zealand continues to experience yield and demand pressures, due to the global economic crisis and increased competition from its Australian counterparts.

This scenario is likely to continue, due to Qantas/Jetstar's aggressive push on the Tasman and in domestic New Zealand markets. Meanwhile, Pacific Blue continues to fight to grow its presence domestically and internationally, with the possibility of utilising Virgin Group Embraer regional jets to access more regional points in New Zealand. All of this will continue the downward pressure on yields.

Overall, Air New Zealand could be heading for another month of double-digit yield reductions in Sep-2009. It is unclear when the current down cycle will truly hit bottom.