Virgin Blue is today recovering from a major technical fault that left thousands of passengers delayed or stranded on Sunday. Flights were cancelled as the Navitaire New Skies system experienced a hardware failure, forcing the airline to switch to a manual system.

On Monday morning the carrier advised that all airport check-in and boarding systems were back online and operating as normal. The carrier is now working to reduce congestion at airports and expects to have all affected passengers on flights today.

According to the Australian Bureau of Infrastructure, Transport and Regional Economics (BITRE), Qantas achieved the highest on-time departures and arrival rates of Australian carriers of 86.5% and 86%, respectively, in Aug-2010. Jetstar was next at 82.4%, followed by Virgin Blue at 81.7% and Tiger Airways at 72.6%. The overall on-time performance for participating airlines averaged 83.3% for on-time departures and 81.9% for on-time arrivals.

Tiger has consistently been the worst performer for on-time departures, while Virgin Blue’s performance has been slipping behind Qantas throughout 2010, according to the BITRE’s data.

Departures on time (by month from August 2009) 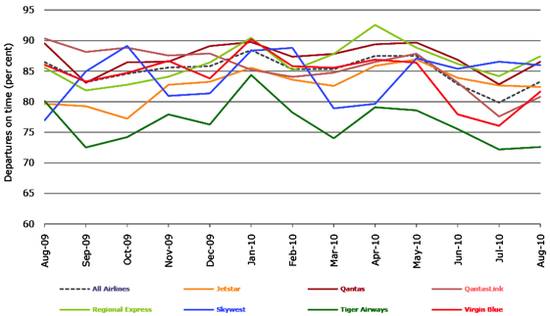 Speaking to the Sydney Morning Herald, Jetstar CEO Bruce Buchanan stated Virgin Blue "ceded five or six points of market share to Tiger" in the last quarter (April to June) amid "ferocious price competition", resulting in a "pretty tough [quarter] in the domestic market, especially at the leisure end".

Virgin Blue’s shares slumped 3.4% on Friday, ahead of the technical glitch. The stock has fallen a further 1.2% in early trade today.

Elsewhere, AirAsia lost 0.9% on Friday, while Tiger Airways was flat. 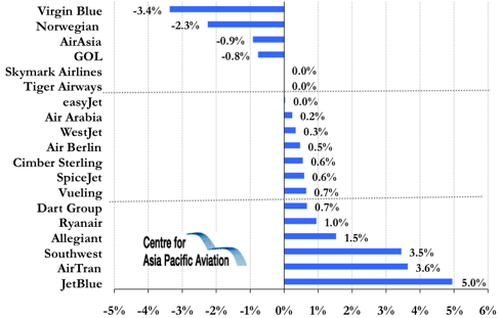