HAECO drops in wake of results, CAE rallies, Boeing up despite nervousness from suppliers

After climbing 3% on Tuesday, investor confidence in HAECO seems to have evaporated in the wake of its less than spectacular results, with the Hong Kong-based MRO company’s share price losing 8% yesterday.

HAECO reported a 13.3% fall in revenue and a 46.3% drop in operating profit during 1H2009, reflecting “increasingly difficult trading conditions”. It almost halved its interim dividend to HKD0.50 per share, compared to HKD0.93 per share in 1H2008, and expects “substantially weaker” activity in 2H209.

Of the other listed aviation suppliers, CAE was the big winner yesterday, up 6.7%. The company will release its FY2010 first quarter results on 12-Aug-2009. BBA Aviation was also up strongly, gaining 4.5%.

Boeing's shares climbed 0.7% yesterday, despite renewed supplier speculation that its B787 programme will be delayed by another six months. Boeing is due to make an announcement regarding a revised test flight and production schedule by the end of 3Q2009. However, CEO of UK air duct manufacturer, Senior, Mark Rollins, has added to the speculation regarding the aircraft, stating that the company anticipates “another six-month delay” for the project and questioned Boeing’s feedback on the programme, stating the manufacturer has “generally gone quiet for everybody on the 787”.

For its part, Boeing confirmed it is in talks with major suppliers and customers regarding the aircraft. Last month it smoothed ruffled feathers at Qatar Airways, prompting the carrier’s CEO, Akbar Al baker, to express his faith in the programme.

Airbus’ new major programme, the A350 XWB, may also be facing some difficulty. Negotiations with Germany over launch aid financing for the programme have reportedly been held-up on work share arrangements for the programme. Germany, which is expected to provide a third of the EUR3.3 billion in launch aid for the EUR11 billion programme, is reportedly seeking to a greater proportion of the manufacturing share for the aircraft. Shares in Airbus parent, EADS, were up 1% yesterday. 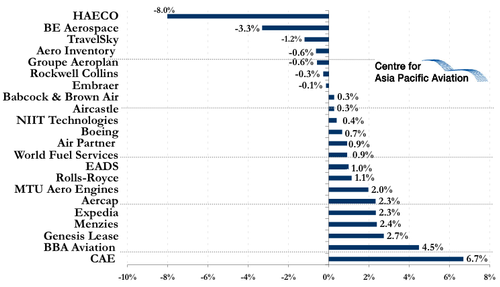