HACTL and AAT both reported a further stabilisation in demand in Oct-2009, although a full recovery appears to still be some time away.

The key indicator will be whether Hong Kong's cargo volumes move up significantly this month (ie in the pre-Christmas period), after last year's disappointment.

In the month, HACTL reported a total of 225,856 tonnes handled, for a 1.7% year-on-year improvement, the first year-on-year growth in over 12 months (this compared to cumulative tonnage declines of 14.5%). However, it should be noted that air cargo volumes started to decline in Jul-2008, so the gain was off a near double-digit decline in Oct-2008.

HACTL import volume continues growth trend and up by double-digits 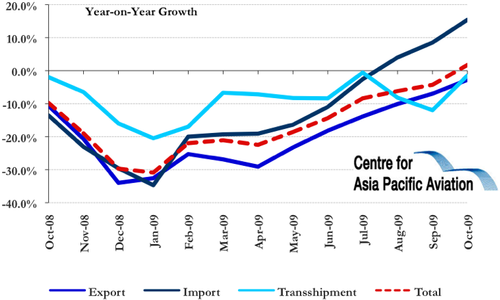 Export cargo registered 36,093 tonnes, also a 3% year-on-year reduction, with import cargo down 4% and trans-shipment cargo volume down 2%, although off a small base, to 357 tonnes. 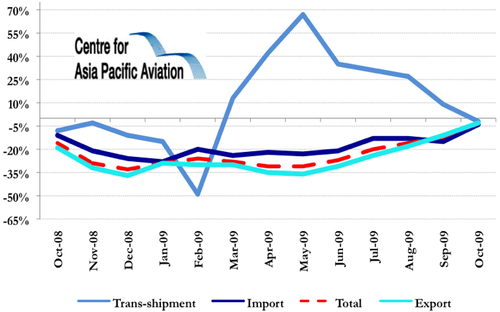 Both HACTL and AAT are still feeling the impact of the global economic downturn, in addition to the impact on the Hong Kong hub from cross-Strait liberalisation.

Both companies are now hoping for further tonnage improvements in the lead up to Christmas and should be encouraged by comments by  Cathay Pacific General Manager Cargo Sales & Marketing, Titus Diu, who stated  the carrier expects cargo demand to  “remain strong through to mid-December”.