Grupo Aeroportuario del Sureste (ASUR), the operator of airports in southern Mexico, declined -1.3% to on Monday (13-Dec-2010). The company was cut to “hold” from “buy” at Banco Santander. Morgan Stanley also upgraded shares of ASUR from an “equal weight” rating to an “overweight” rating in a research note to clients and investors on 09-Dec-2010.

India's GMR Infrastructure Group (+1%) CFO A Subbaro stated the company expects revenue growth of 10-15% in FY2011. He added that the company expects a "significant jump in revenues" from Hyderabad, Delhi, Male and Sabiha Gokcen Airports in 3Q and 4Q. He added that Sabiha Gokcen traffic "has been exploding almost to the extent of 80-90% there and Male airport has significant fuel revenues". Meanwhile, GVK Power and Infrastructure shares gained 5.3%. 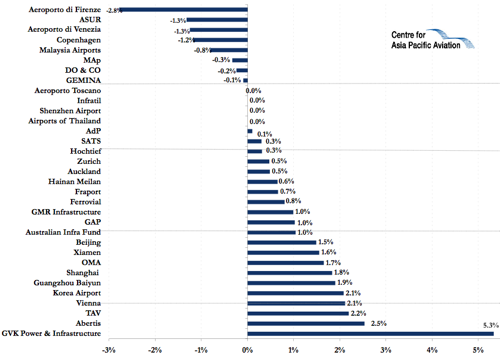 UAE's Dubai Airports and JCDecaux SA (+1.8%) announced (13-Dec-2010) that JCDecaux Dicon and Dubai Airports has entered into a 10-year contract for the exclusive advertising concession at the airport. Upon completion, DWC will be the world's largest airport in terms of volume and sizes. It will feature five runways, up to four terminal buildings, and have the capacity to handle 160 million passengers p/a, almost double the 88 million passengers of the world's busiest airport in 2009. Phase I of DWC was opened for cargo operations in Jin-2010. 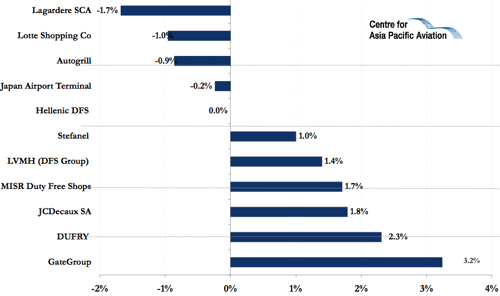