01-Jul-2010 was not a good day for the markets, as nervousness about Euro credit, Chinese economic cooling and weak consumer spending coursed through the community’s veins. The FTSE 100 index fell 1.62%, France’s CAC 40 was down 2.02% and the German DAX lost 1.4%. But those losses went only part way to explaining the depth of airline share price falls, when 12 of the 21 CAPA covers fell by more than 2%.

Norwegian Air Shuttle (-7.4%) again led the market down on a day when Europe’s airline shares suffered from one of the more ugly days of the year. On 1-Jul-2010, all but Turkish Airlines (+1.0%) and El Al (+0.1) defied the general direction of the wider market.

Both British Airways and erstwhile partner Iberia were also under fire yesterday as sellers drove down Iberia’s shares 5.7% and British Airways’ 4.9%. British Airways appears to be resolving the issue of its pension liabilities and is awaiting the response of BA inflight crews to a new proposal issued by the carrier this week. The Unite Union, which represents the cabin staff, has not made a recommendation to staff on the BA offer, but if the vote is negative, Unite says strike action could begin again by the middle of August, right in the middle of the peak holiday season.

The carriers’ merger is proceeding steadily towards fruition, although the usual rumours about the difficulties in resolving pilot seniority and other issues are circulating. 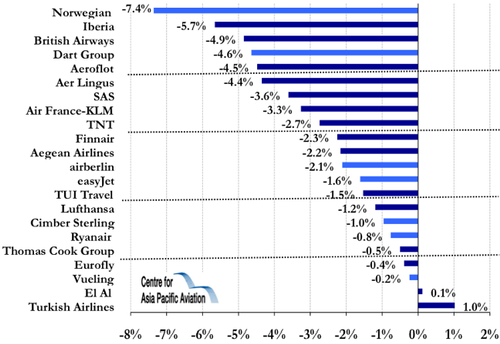