As air travel recovers, the outlook for the MRO industry is also improving, although not quite at the pace some observers forecast towards the end of 2009. Goodrich Corp CFO, Scott Kuechle, commented this week that a recovery in MRO activity is due in 2H2010, but the company does not expect to see real growth until 2011, with 2010 growth expected to be “fairly low”.

His commentary has been supported by the outlook of engine manufacturer Safran. CEO, Jean-Paul Herteman, stated yesterday that the aftermarket sector remains volatile and a recovery is not due until the end of the year. Safran expects engine deliveries to be stable in 1Q2010.

Meanwhile, Safran has dismissed reports that it is involved in a dispute with EADS over delays to the A400M. Reports last week indicated that EADS was seeking EUR500 million in damages over the delays to the aircraft’s turboprop engines.

Elsewhere in the aviation supply chain, Boeing Capital Corp stated that the sentiment in the aircraft financing market is improving, as witnessed by ILFC’s expansion of its loan deal from USD750 million to USD1.3 billion. The company’s General Manager of Aircraft Financial Services commented that although there has been a downturn in aircraft values, there have been no “fire sales” of aircraft, as had been feared. ILFC has reportedly received interest from four parties for a planned sale of USD3.5 billion in aircraft assets. See related report: Who will get ILFC’s aircraft?

Aircraft lease values for newer used aircraft are stabilising, with some indications of increases, although Boeing VP Marketing, Randy Tinseth, cautioned of continued weakness in the broader leasing community, private equity firms and hedge funds, according to a report in The Wall Street Journal. The ‘funding gap’ for aircraft purchases is nonetheless expected to fall to USD2-4 billion this year, with Airbus and Boeing cutting their financing commitments as traditional sources of funding re-open and export credit agencies remain strong lenders.

Commercial sales saw a gradual increase in Feb-2010, according to Chairman and CEO, David P Storch, but the operating environment was still described a difficult.

ARR was hit by the Mesa Air Group Chapter 11 filing, with a USD6.1 million cut in revenue attributed to the bankruptcy.

Meanwhile, lessor Air Partner's shares slid 10.3% on Tuesday, with the company reporting a pre-tax profit of GBP1.0 million (a 77% decrease) and a net loss of GBP1.2 million for the six month to 31-Jan-2010, the first half of its financial year. Overall sales were down 7% year-on-year, to GBP95.0 million.

During the period, the company placed it Private Jet Operating Company into administration to stem heavy losses. Air Partner suffered a GBP2.4 million impairment due to the move. Its Commercial Jet Broking Division also noted that the market still suffers from overcapacity and discounting continues.

For a full wrap of daily MRO, aerospace and leasing developments, sign-up for Aviation Investor Daily. 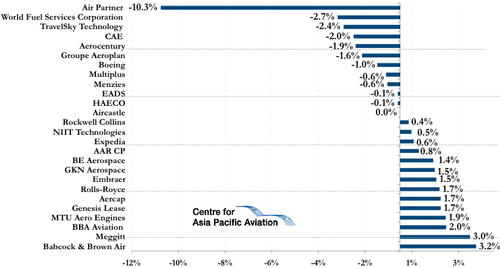