North and South American carriers rose again on Thursday (27-May-2010) boosted by gains in the wider market, after China denied reports it was planning to sell European bond holdings. The Dow (+2.9%) ended trading higher as a result.

South American carriers were among the biggest gainers of the day, after IATA stated Latin American carriers posted a 1.2% year-on-year increase in international demand for Apr-2010. However, this was well below the 4.6% growth recorded in Mar-2010, which was already a weak month as a result of the Chilean earthquake.

Their North American counterparts posted a 1.9% decline in international demand last month, primarily as a result of the ash crisis on North Atlantic routes. This was a step backwards from the 7.8% growth recorded in Mar-2010. The fall in demand was less than half the 4.5% cut in capacity, pushing load factors up to 80.2%.

Fitch stated the rating upgrade reflects the company's consistent improvements in cash flow generation, comfortable liquidity and continued decline in leverage during the past several quarters. The upgrade also factors-in expectations that the company will continue lowering its net leverage, while maintaining an ample cash position. The company is exposed to fuel cost volatility and other industry-related risks, such as revenue volatility, high operating leverage and increasing competition. The ratings incorporate the high degree of sensitivity of GOL's operations to changes in the macroeconomic scenario.

The Stable Outlook reflects expectations that GOL will maintain its solid market position as Brazil's second-largest airline and that the company will continue to benefit from stronger domestic demand for domestic air travel in the business and leisure segments following the recovery in Brazil's economy.

The Rating Outlook for the long-term corporate ratings is revised to stable from negative.

Fitch stated the downgrades reflect the deterioration in TAM's credit profile due to higher leverage levels as a result of lower operating cash generation. TAM's weak performance largely reflects lower RASK levels (lower yields and load factors) as a result of the adverse operating environment for the airline industry during the first part of 2009 and the strong competition in the market over the past several quarters. Despite the strong recovery of the domestic market, yields are expected to show only a modest recovery and the company's decision to further expand its fleet should limit the benefits of growing market demand on its load factors. The Outlook revision to stable reflects Fitch's expectations that the company's net leverage will not recover in the near term and will remain around 6.0 times, which is consistent with the assigned rating category. 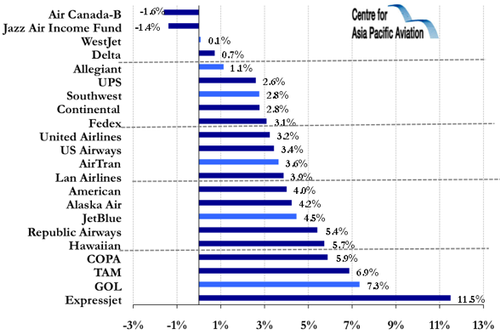