GOL (-3.5%) stocks suffered the most on Monday, following the LCC’s announcement it has concluded its global share offering, which increased its cash position by BRL627.1 million (USD365.2 million).

Southwest Airlines’ (-0.7%) was also lower, after it was lowered from ‘Neutral’ to ‘Underweight’ by JP Morgan. Standard & Poor's Ratings Services also recently lowered its credit ratings on Southwest from 'BBB+’ to 'BBB'. The downgrades followed the carrier's fourth net loss in the past five quarters, of USD16 million in the three months ended Sep-2009 (3Q2009).

AirTran (+5.1%) stocks meanwhile made the biggest gain on Monday, after JP Morgan upgraded the LCC’s stock from ‘Neutral’ to 'Overweight'. JP Morgan cited lower costs, higher profits, better liquidity, as well as a cheaper valuation in their research of the LCC.

Alaska Air, Allegiant and US Airways on the up?

Analysts at Jesup & Lamont cited AirTran and Alaska Airlines (+1.6%) as its top picks of the week ahead of earnings reports. ABR-Seven Summits Research added technical indicators for Alaska’s stocks are currently bullish, with Standard & Poor’s rating the carrier’s stock a ‘Neutral’ 3 star hold rating (out of 5).

Jesup & Lamont also forecast Allegiant (+2.5%) and US Airways (-2.6%) stocks would perform well on their earnings releases, due to rising fares ahead of the 2009 holiday season, improving the carriers’ outlooks for 4Q2009. United Airlines and Allegiant are to report their 3Q2009 results on 20-Oct-2009. 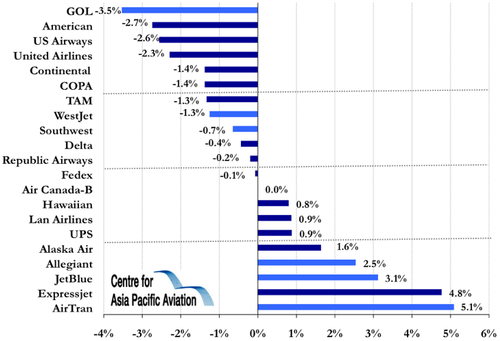