GOL and TAM up on strengthening Bovespa; WestJet and Air Canada down

The market rose following data from the National Association of Realtors showing resales increased 10.1% to an annual rate of 6.1 million, compared to 5.5 million in Sep-2009. According to Reuters, stocks were also boosted by positive comments from the Federal Reserve the day prior, stating the US’s stimulus program should be extended past the original expiry date.

FTN Capital Markets Corp forecast during trading system unit revenue will decrease 5% year-on-year, the first single digit decline since Jan-2009, as international demand starts to recover and airlines impose significant fare surcharges during the peak holiday period. According to the analysts, "Network airlines with large Atlantic and Latin America Operations, namely AMR, Delta and Continental, may surprise positively in 4Q2009," American Airlines (+1.7%), Delta Air Lines (+1.4%) and Continental Airlines (+3.6%) were each up at the end of trading.

Brazilian carriers GOL (+4.3%) and TAM (+3.5%) stocks showed strong gains on Monday, as the Bovespa rose 0.7%, due partly to a weakening of the US Dollar, which boosted commodities shares. The Real strengthened BRL0.58 to 1.72 per USD. According to analysts at Rio Gestao de Recursos, "the weakening of the dollar and the gain in commodities, helps several emerging markets, including Brazil". The analysts also noted the improving Bovespa has been evenly distributed among a variety of companies.

Meanwhile, both WestJet (-3.1%) and Air Canada (-1.5%) fell despite the Canadian TSX index (+0.4%) ending trading up marginally, ahead of bank 1Q2009-10 earning reports, which are expected to highlight a continuation of improvements in the sector. Analysts Raymond James announced that yields were still under pressure in the Canadian market. 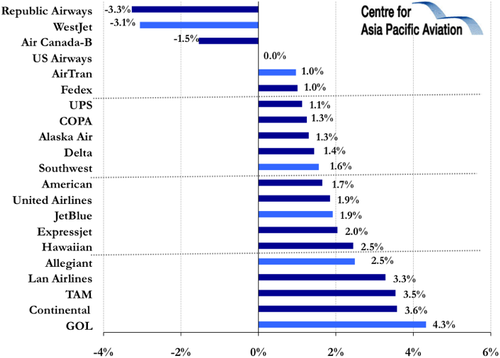