Brazilian carriers on the rise

Both GOL (+7.1%) and TAM (+4.9%) made the largest gains of the day, despite a 0.3% drop in the Bovespa. GOL rose the most in over a month after reporting a 34.8% year-on-year rise in passenger numbers for Dec-2009, reflecting both the company’s better positioning in its markets in 2009 and increased demand, which was driven primarily by Brazil’s economy recovery signs. Load factor was also up 11.6 ppts, to 76.3%. See related report: GOL seeing “gradual recovery in yields”; Fourth consecutive month of RASM growth for Southwest

Jesup & Lamont are maintaining their ‘Buy’ rating of the freight carrier, and estimate UPS will report a 2010 EPS of USD2.85, up from its previous estimate of USD2.72.

UPS also announced it is streamlining its US domestic management structure, reducing the number of Districts and Regions in its US small package operation from 46 to 20, resulting in the elimination of approximately 1,800 management and administrative positions across the country. Normal attrition will minimize some job displacements, and approximately 1,100 employees will be offered a voluntary separation package. As a result of the restructuring, UPS expects to incur a one-time charge in 2010 that will be offset by cost savings in the US small package business.

Both UPS and FedEx’s stocks were also boosted by reports of a 7.0% gain in cargo revenue tonne miles by American carriers in Nov-2009, the first positive growth in 16 months, according to the Air Transport Association (ATA). 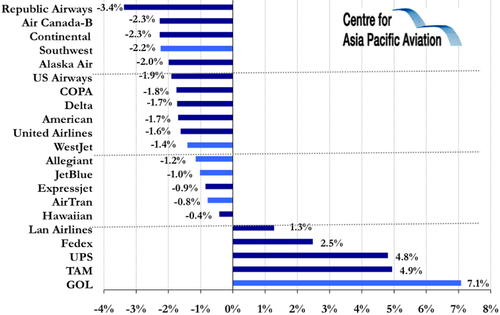