Leading the way on Friday was Brazil's GOL, soaring 11.8%, upon the release of the carrier’s Jul-2009 traffic results. During the month, GOL recorded an increase in traffic (RPMs) on its route network for the fourth consecutive month (+7.4%), despite a 2.8% system capacity (ASMs) reduction, as the carrier benefited from increased traffic over the Jul-2009 school vacation period, an increased supply of low-fare seats, its new fare category product and improvements to its SMILES frequent flyer programme. The carrier also experienced improved load factors (+6.8 ppts to 71.5%) and yields, with net yield improving slightly year-on-year.

Kuwait's Jazeera Airways was also stronger on Friday, gaining 9.6% and posting the largest gain on the Kuwait Stock Exchange. The LCC’s CEO, Stefan Pichler, last week stated the carrier is looking for a second hub in the Middle East to replace Dubai International Airport.

Also in the Middle East, Air Arabia's shares declined 1.9% on Sunday, after performing well (+1.9%) in early trading upon the release of the carrier’s 2Q2009 results.  The carrier reported a 10.0% increase in net profitability and a 10.5% increase in operating profit in the three-month period and stated it expects to report “positive results” for 2009, assisted by fuel hedging, lower unit costs and high load factors. However, the carrier conceded that the next three to six months would remain difficult as there is still excess capacity in the market, diluting yields, CEO, Adel Ali, also stated that swine flu is a bigger threat for the carrier than the global economic situation and passenger traffic is suffering due to the outbreak.

In Europe, Norwegian Air Shuttle gained 2.2%, following the release of its Jul-2009 traffic results. The LCC reported improved yields in the month, of 4% year-on-year, with unit revenue also improving 6%, as the carrier increased its load factors by 1 ppts to 88% and passenger numbers by 16%. Among the major European LCCs, easyJet gained 1.1%, with Ryanair remaining stable. 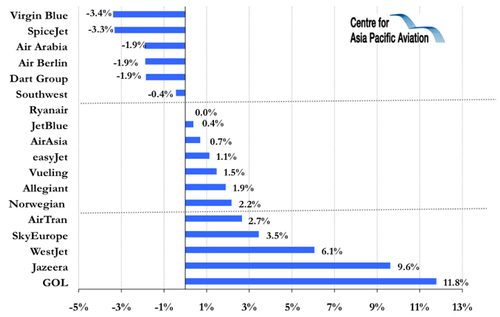