Global airports see signs of stabilisation in air traffic in Aug-2009, but long road to recovery

Global airport passenger traffic in Jul-2009 showed positive signs of stabilisation, according to Airports Council International (ACI), which represents 597 members operating over 1,679 airports in 177 countries and territories. According to ACI World Director General, Angela Gittens, “this is a scenario where we can draw optimism from a negative. Although overall traffic is still lower than 2008, the gap is narrowing significantly”. However, ACI also warned that it “may still be too soon to assume the worst is over”.

This is because while contractions in volumes have eased in Jul-2009, traffic in the month came off a negative base in Jul-2008, meaning falls are now compounding. Previous monthly passenger growth comparisons this year have come off a positive 2008 base. 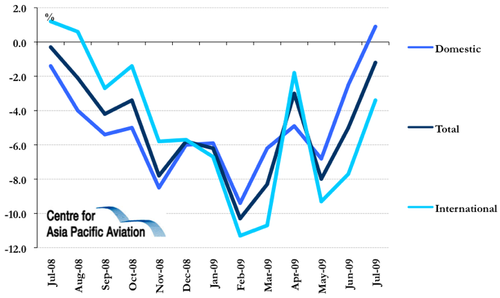 On the other end of the spectrum, North America, Europe and Africa experienced contractions of 3.9%, 3.8% and 1.4%, respectively. The Middle East is the stand-out performer, growing strongly in Jul-2009 off a strong base in Jul-2008. 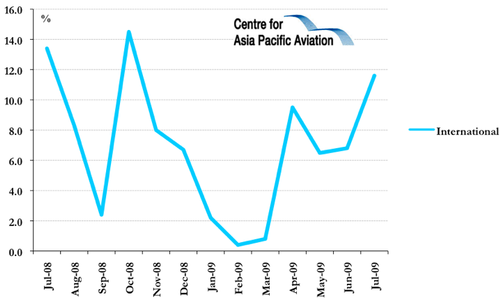 Although total international traffic remained depressed (-3.4%) compared to Jul-2008, this reduction is an improvement over the 7% decline recorded in Jun-2009. The Middle East and Africa regions both reported positive international growth (of 11.6% and 0.7%, respectively).

Freight still depressed but slowly clawing way back up

According to ACI, although freight results are “still below 2008 figures, the steep downward spiral of the first quarters has ceased”.

For international freight, the Middle East region was the only region seeing positive growth (+3.5%), while domestically, only the Asia Pacific reported positive results (+12.1%), due in large part due to increased activity at Chinese airports.

Both Latin America & Caribbean and Europe experienced high double-digit international freight contractions in the month (-19.2% and -16.8%), while North America’s results were down by 3.5% although this, once again, represented a rising traffic trend. 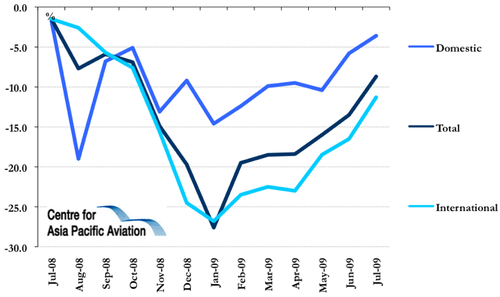