2009 has been the worst year ever for aviation; global traffic declined 3.1% year-on-year. Hidden in that statistic is the rapid contraction of legacy airlines, as many have reduced capacity to cut losses and to keep yields from falling further. 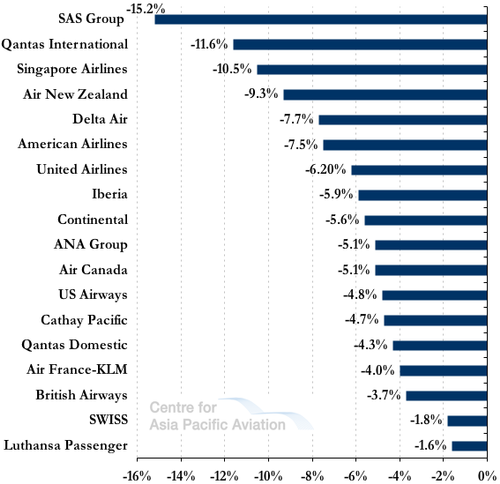 As these network airlines have withdrawn capacity, there has necessarily been a flow-on to staffing levels, with a combination of reductions in head count and in salary levels.

Most employees of older airlines are heavily unionised, in many cases involving ten or more unions. So this scale of cutback would normally have caused extensive industrial disputes. Unexpectedly, the threat did not materialise in 2009, with many unions accepting the reality of a chronic downturn for their airline employer. The restraint shown reflected an understanding that this was a potentally life-threatening environment.

So, in most cases, intelligent deals have been achieved, where the airline involved has both had the communication skills and a sufficiently obvious need to metamorphose. Indeed, in this year of Darwin’s sesquicentennial, some unions have illustrated their ability to evolve to meet new conditions.

There were exceptions of course, or at least near-misses, during the year.

Europe’s old airlines have suffered most from unionist inertia, although strikes have been relatively rare. SAS has staggered from one industrial relations crisis to another and remains drastically overweight compared with its competitors; Finnair has recently announced a new CEO, after the current one resigned in frustration at the company’s unions’ intransigence. Aer Lingus is apparently on the brink of either industrial revolution or closure or both; and British Airways’ flight attendants took the airline to the edge before Christmas, in the process irreversibly alienating a host of premium clients – and compounding the company’s problems.

Alitalia, rivalled only by the former Olympic Airways for its retro-unionism, finally was forced to dissolve into something more realistic in order to persist in today’s world. Meanwhile, Olympic itself was finally privatised, despite union opposition (even if its new left-leaning government is toying with re-nationalising it).

Across the Atlantic, Air Canada’s militant unions came close to shutting the near-bankrupt airline down, before apparently reaching a brokered agreement, as the government bailed out the carrier.

In the US, pilots’ unions also continued to apply muscle, but have generally not disrupted operations in 2009; their impact has been more subtle, influencing directions - Southwest Airlines for example was obliged to make strategic changes, limiting international codeshare expansion in order to secure agreements with its pilots. But even the massive Delta-Northwest merger appears to be avoiding the usual integration problems so typical when seniority issues are at stake.

In the Asia Pacific region, employees and their unions have widely accepted the privations of a declining market, moving to part time work, unpaid leave and reduced hours, helping limit the need for redundancies. This has worked well for the airlines and for the workforces; knowing that the region has massive upside for expansion, once the global financial crisis abates.

In these circumstances, everyone has an interest in ensuring that human resource skills are retained. But even that approach has entailed hardship, albeit spread more widely and less painfully. In this climate, only Cathay Pacific and Qantas’ unions have hinted at strife (and of course the well-fed unions at Japan Airlines have played a large role in the carrier’s current malaise).

The 2010 scenario: The good news could bring conflict

But as we enter the second decade of the new century, all the signs are of gradual recovery, both in traffic numbers and profitability, as some premium market recovery occurs. This will make it less palatable for union leaders to accept the need for frugality.

The fruits of recovery will be accompanied by some gradual capacity expansion (as new aircraft orders are pushed into the market – like it or not) and, for some airlines, profitability.

In these circumstances, the case for cost cutbacks – still in fact badly needed by all legacy airlines – will be much harder to plead. And the restraint shown by labour in 2009 is likely to be a thing of the past.

But the legacy of the last five quarters of difficult times is that many airlines end 2009 in a weaker position than ever. Balance sheets – to the surprise of many – have in some cases been bolstered by successful capital raisings, either of equity or debt. But debt must be repaid and interest rates will be rising. Meanwhile, low cost competition is eating away at the network airlines. Much more change is inevitable.

Here lie the seeds of a difficult year for staff relations, especially in Europe and North America. Europe, where conditions look like remaining difficult, and whose unions are more anxious to take a stand, perhaps seen as last ditch survival, is likely to have more difficult times to confront. Multi-industry unions like UNITE, whose officials took BA to the brink in recent weeks, may see the airline industry as a usefully conspicuous industry to draw lines in the sand for other sectors of their membership when it comes to staff cutbacks and salary constraints.

The US, where sluggish growth may occur, is also more likely to suffer industrial action as airlines achieve profitability, even where this has been achieved through added ancillary charges and capacity reductions rather than by achieving efficiencies.

2010 is shaping as the year for industrial confrontation – and may as a result see more fundamental change, including market exit of some famous brands, than in the past year. As a minimum, there will be major shifts in the shape of some of those well known entities. British Airways for one seems unlikely to emerge in its existing form, unless there are major attitudinal shifts across the board.