The world’s airlines and airports are experiencing a marked improvement in demand in 2010 after a very challenging 2009. ICAO forecasts airline scheduled traffic of Member States to grow by 6.4% this year in terms of passenger-kilometres performed (PKPs), compared to a decline of 2% in 2009. The “substantial” projected increase reflects positive economic prospects worldwide, based on 4.5% growth in global GDP as forecast by Global Insight. 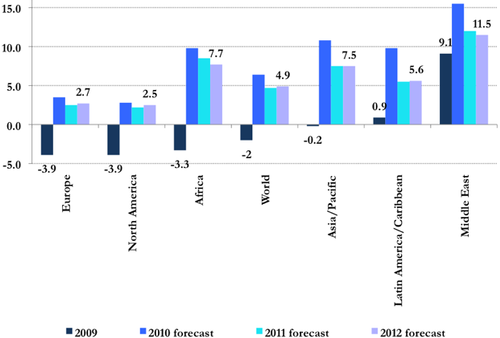 Traffic for Asia Pacific airlines should grow considerably faster than the global average, due to better economic prospects in China and India, where aviation activity is expected to expand more rapidly. Middle East, Africa and Latin America regions will also enjoy higher traffic growth as economic conditions improve. North American airlines will grow slower than the world average because of lingering economic weaknesses.

With expectations of more than 4% annual growth of the world economy for the next three years, world traffic should grow at 4.7% and 4.9% for 2011 and 2012, respectively, according to ICAO.

Despite the 2009 economic downturn, air carriers were able to narrow their losses last year thanks to “drastic capacity reductions”, which helped cut costs and halt yield dilution, according to ICAO

In 2009, world airlines generated an estimated operating loss of USD4.1 billion. This performance marked a partial recovery from 2008 operating losses of USD8.9 billion, but still far from the record USD19.9 billion operating profit generated by the airline industry in 2007.

According to ICAO, the financial performance of the world’s airlines is “expected to improve in 2010 as traffic rebounds”, without disclosing further details.