Germany’s Blue Wings has suspended operations due to financial difficulties, with the carrier noting it is holding a “discussion over our future economic sustainability”.

It is the carrier's second stoppage in less than 12 months. Regulator, LBA, has now suspended Blue Wings’ licence, following the carrier’s announcement.

Tiger Airways launched its IPO on 13-Jan-2009, confirming plans to raise up to SGD246.8 million (USD178 million) through the sale of approximately 165.2 million shares at SGD1.65 (USD1.19) per share. The carrier expects the shares to commence trading on the Singapore Stock Exchange on 22-Jan-2010.

Approximately USD178 million from the fund raising exercise will be used to finance aircraft orders, while USD36 million will be allocated to pay down short-term loans, while the carrier is considering using USD7 million to establish a new carrier or new bases. 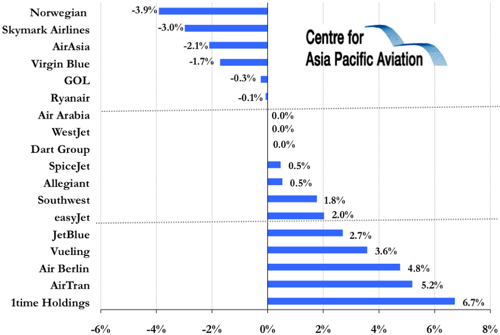