Georgia’s aviation market is expanding with the help of a proactive Georgian Government, which is seeking to transform the country into a regional transportation hub. In 2012 the small country has seen not only increased services from European carriers, but from carriers further afield in Asia and the Middle East. Georgia’s home-based aviation market is also set to expand with the launch of two new airlines, FlyGeorgia and Air Caucasus, in 2012.

The Georgian Government is showing much more interest in its national aviation industry having made recent commitments to turning the country into a regional transportation hub. Georgia, which is strategically located at the crossroads of Eastern Europe and Central Asia, has a number of infrastructure projects under way which will see a network of modern airports built.

The Government has also made changes to the Air Code of Georgia in order to introduce greater regulation. Changes include the introduction of new standard working and flying times as well as requirements for fuel, maintenance and technical staff to be certified. The Georgian Civil Aviation Agency took comments made by ICAO auditors in 2007 into account during its work on the bill.

Georgia’s new emphasis on developing its aviation industry has seen new bilateral air services agreements signed. On 29-Mar-2012 a bilateral with the UAE was signed, allowing full flexibility on routes, capacity, number of frequencies and types of aircraft, in any type of service (passenger or cargo) including the exercise of fifth freedom traffic rights. The Government is now working on an air services agreement with South Korea, which is expected to result in the launch of Tbilisi-Seoul service.

Georgia’s aviation market is primarily international with most of the capacity out of Tbilisi International Airport. The country has other much smaller two international airports, Kutaisi Airport and Batumi Airport. Approximately 12% of Georgia’s international capacity is contributed by low-cost carriers, particularly by Turkey's Pegasus Airlines which is currently the fourth largest airline in the Georgian market based on seat capacity data from Innovata. 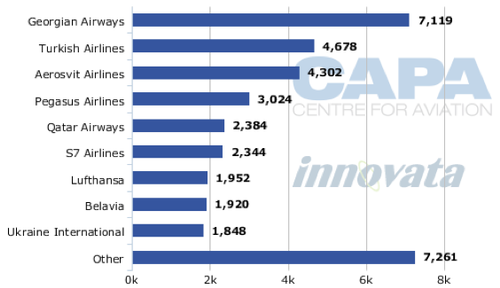 Airlines operating to Georgia serve a wide range of markets with Europe, Middle East and Asia included. However Eastern and Central Europe is clearly Georgia’s largest market and accounts for approximately 78% of overall capacity. The second largest market is the Middle East with 13% followed by Western Europe, Central Asia and North East Asia which combined only account for 12% of total international capacity. 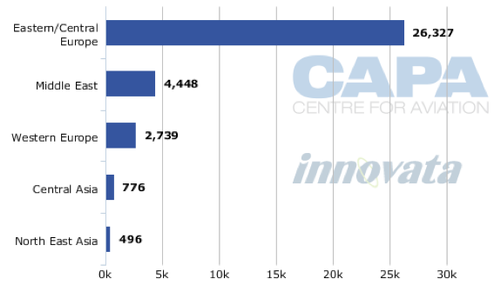 Two new Georgian carriers have unveiled plans to launch in 2012, with FlyGeorgia announcing in Jan-2012 plans to launch services from Tbilisi to destinations in Europe, Middle East, the CIS region, Central Asia and South Asia. The full-service carrier, which has yet to announce a launch date, contracted Dubai-based Tasc Aviation to assist in its launch.

More recently, in Jun-2012, Air Caucasus announced plans to commence operations in Georgia with services to Europe, the CIS and Asia. The proposed start-up is backed by Georgian and Arab investments.

If launched, both new airlines would represent new competition to Georgian Airways as well as result in a significant increase in international capacity at Tbilisi. Both could also further the Georgian Government’s goal of creating a regional hub. But that could hinge on how rapidly the new carriers expand, how balanced their network is and if they are keen to focus on transit as well as point-to-point traffic.

Georgia’s existing flag carrier is small and currently only accounts for 19% of international capacity in Georgia, putting it only slightly ahead of the 16% capacity share held by Turkish Airlines, which is currently the largest foreign carrier in the Georgian market. Georgia Airways serves 10 international destinations, mostly from Tbilisi although it also operates four international routes at Batumi.

All but two of Georgian Airways’ international destinations are now in Europe, limiting the carrier’s ability to pursue transit traffic. The two exceptions are Tehran and Tel Aviv. The carrier currently does not serve any other Central Asian country, a market it would need to add for Georgia to become a regional hub. Georgian Airways now has a small fleet consisting of less than 10 Boeing 737s and Bombardier CRJs.

While Georgia’s list of airlines is expanding, foreign carriers are also showing more interest in the small nation with a number of new routes launched in 2012.

New routes from Georgia in 2012

Perhaps the most notable new entry is LCC Wizz Air, which plans to launch service from Kutaisi to Kiev in the Ukraine in Sep-2012. This route is significant as Wizz will only be the third LCC serving Georgia after Pegasus and FlyDubai. Wizz will also be the first foreign carrier serving Kutaisi Airport and the success of its first route Georgia route could lead to expansion at Kutaisi as well as potentially at Tbilisi and Batumi.

The Ukraine is already one of the biggest markets from Georgia, with Georgian Airways, AeroSvit and Ukraine International Airlines all serving the Tbilisi-Kiev market while Georgian Airways and AeroSvit also serve the Batumi-Kiev route. Wizz could eventually look at also linking Kiev with Tbilisi or Batumi or launching service to Georgia from one of its several other bases in Eastern Europe.

Qatar Airways, which launched service to Tbilisi via Baku in Feb-2012, is also an important new player in the Georgian market. Qatar is the first of the major Gulf carriers to serve Georgia and is the only the second Middle Eastern carrier in Tbilisi after FlyDubai. As a result Qatar opens up new faster connections to passengers travelling between Georgia and Africa, the Middle East or Asia.

Air Astana increased its existing Almaty-Tbilisi route from three to four times weekly in Jun-2012 and has unveiled plans to launch twice weekly Astana-Tbilisi service in Sep-2012. Tbilisi is an increasingly important destination for Air Astana as the Kazakhstan flag carrier looks to build up its Central Asia network and offer connections via its Almaty and Astana hubs.

Other airlines are showing increasing interest in Georgia with Latvia’s airBaltic, which serves Riga-Tbilisi service three times weekly and is now considering raising capacity on this route to four times weekly.

2012 will be an interesting year for Georgia’s aviation industry with the potential launch of two new carriers, and increased interest from foreign carriers which are launching new services or increasing frequencies. While some of the upcoming increases will be just seasonal, further increases will come as the country makes further steps towards becoming a regional transportation hub.