Garuda Indonesia to raise USD526m from IPO, about half initial expectation

The Indonesian Government has set flag carrier Garuda Indonesia's IPO price at IDR750 per share - at the low end of the IDR750-1100 initial range and slashed the shares on offer from 9.4 billion to 6.3 billion. The carrier will raise USD526 million from the sale of 26.67% of its equity, or less than half the USD1.1 billion initially expected.

The shares will debut on the Jakarta Stock Exchange next month. Up to 80% of the shares would be allocated to domestic investors, with the remainder to foreigners. The airline had said in its prospectus it would sell 36% of its shares.

The shares on offer include the 7.2% stake held by state-owned Bank Mandiri. According to Reuters, the price reflects 7.4 times Garuda's Enterprise Value (EV) to EBITDA, which is significantly higher than peers including Singapore Airlines and Thai Airways. The reduction in price and shares on issue reflects reports of foreign investor concern over the the pricing and recent weakness in regional share markets. The Jakarta Stock market has fallen some 7% since the start of 2011.

The carrier will use proceeds to acquire new aircraft. It is planning to expand its fleet of 84 aircraft to 150 by 2015.

Garuda will join Tiger Airways and Cebu Pacific in debuting on the stock exchange since early 2010. Tiger and Cebu shares rose 1.7% and 1.8% yesterday, respectively.

Elsewhere, Chinese stocks snapped a two-day losing streak in Shanghai on Wednesday, with airlines having a particularly strong session. 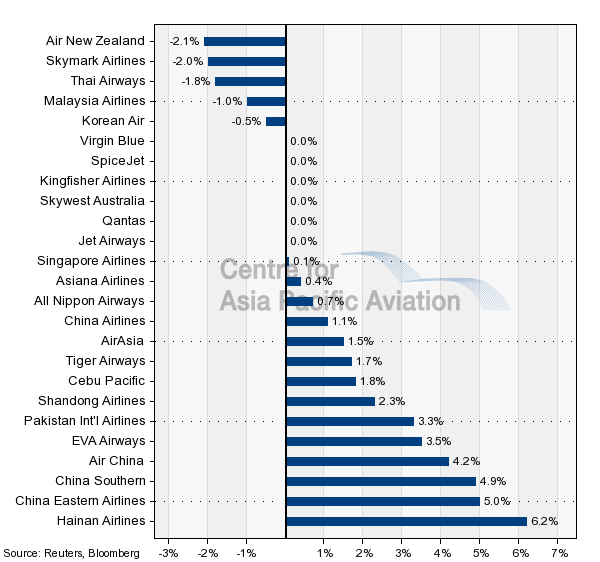 NB: The Australian and Indian stock markets were closed yesterday