Garuda Indonesia commenced pre-marketing its IPO marking the start of the long-awaited offering. Back in Nov-2010, when the carrier originally planned to launch the offering, it had planned to raise up to USD400 million. The carrier has since revised these plans and is now aiming to raise up to USD500 million through the sale of 9.4 billion shares.

Some 79% of shares in the offer will be new shares, with the remaining 21% to be existing shares. This includes Bank Mandiri’s 10% stake in Garuda, worth approximately USD111.3 million. Following the listing, 36.5% of the carrier will be publicly owned. The offer has no over-allotment option. Proceeds from the IPO will be used to help finance capital expenditure, pre-delivery payments other corporate payments over the next three years.

Garuda plans to commence presentations to investors on 14-Jan-2011, to be held in Singapore, Hong Kong, London and New York, ahead of a listing on 11-Feb-2011. Citigroup Inc and UBS AG are the international book runners for the offer, while PT Bahana Securities, PT Danareksa Sekuritas and PT Mandiri Sekuritas are handling the offer domestically.

Moves to launch the offering come after the carrier finally wrapped up its five-year financial restructuring with all creditors, including European Export Credit Agency (ECA) in Dec-2010. The commercial lenders signed an agreement for the remaining debt of USD277 million. Since 2005, Garuda's total debt has decreased significantly from USD868 million to USD464 million on Nov-2010, due to a combination of payment, debt buy-back and equity conversion. The last part of the USD464 million was signed on 17-Dec-2010 in an amount of USD277 million and restructured until 2016. The debt was used to fund the six A330-300s in 1996. The agencies agreed for the maturities to be repaid in instalments of between USD45-60 million p/a.

According to President and CEO Emirsyah Satar, the wrap-up of the financial restructuring is an important milestone for Garuda and will speed the development of the carrier. Not only have the agreements allowed Garuda to launch its IPO, but it will also allow access to cheaper loans from domestic banks.

Garuda and the Indonesian Government see now as the right time to list as foreign investors increasingly look to the Indonesian stock market. The Jakarta Composite Index rose 46% in 2010, making it one of the best performers in the Asia Pacific region. There were concerns the Indonesian Government would request Garuda again delay the offering after the airline reported a 81% year-on-year decline in net profit for the nine months ended 30-Sep-2010, from IDR1000 billion (USD123.4 million) to IDR194 billion (USD21.8 million). The result was despite a 15.5% increase in revenues to IDR12,700 billion (USD1.4 billion).

Mr Satar stated the carrier is now unlikely to meet this year’s profit target of IDR1150 billion (USD129.2 million) due to fleet and route network expansion plans. The carrier purchased 24 aircraft for the year and resumed operations to Europe with a daily Jakarta-Amsterdam via Dubai service in Jun-2010. 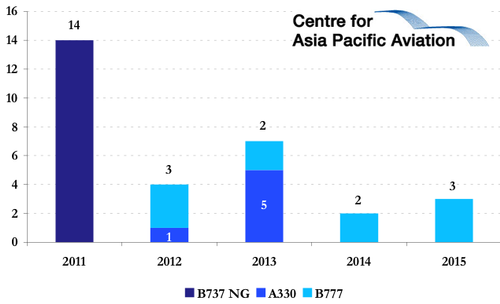 Despite the decline in profits, the carrier certainly has come a long way since being an unprofitable carrier up to 2006 and now expects its bottom line to improve this year, due to higher revenue and lower cost of operations. The improving revenue is expected to lead the carrier to a net profit of USD414 million (INR3.7 trillion) in 2014.

According Mr Satar, Garuda deliberately expanded in 2010 “because if you don’t invest, in coming years there’s not the capacity to expand”. Garuda is presumably looking ahead as the ASEAN region continues to gradually implement its open skies agreement. The carrier expects the IPO will now allow it to “grow sustainably” in international and domestic markets. Garuda plans to increase its international route network from 19 destinations to 28 by 2014 and increase its domestic destinations from 31 to 34 in the same period. Mr Satar identified Australia, China, India Japan, the Middle East and South Korea as targets, while also noting the large potential in the domestic market.

Europe is also a key target market for the airline, with Garuda hoping to launch services to London, Frankfurt, Paris and Rome. However, Mr Satar stated “Europe is a little slack at the moment and the growth is not there”. Demand on its Amsterdam route is “quite stable” at present.

Whether or not Garuda’s IPO will be successful remains to be seen, but reports have stated the offer has attracted much interest.