ACI World has released figures showing a softening of growth and further slowing is expected for the second half of the year. International traffic expanded by 6.3% year-on-year, while domestic volumes rose 4.9%, resulting in an overall passenger number increase of 5.6% in August.

ACI Director Economics, Andreas Schimm stated: "Further softening of growth rates can be expected during the last four months so that worldwide passenger numbers are expected to increase between 4% and 5% in 2010.”

“While it is normal to see growth numbers coming down as we start to compare growth against growth, it is positive to see that the number of airports that still lose traffic reduced drastically with some regions showing nothing but positive figures in the sample." 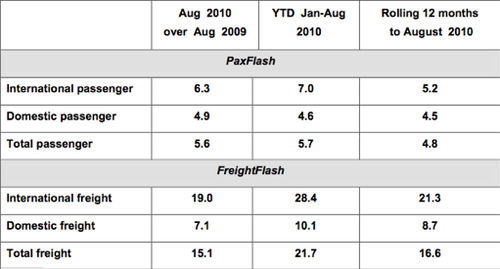 As in previous months, Asia Pacific and Latin America/Caribbean topped the regions with double-digit international passenger growth of 11.6% and 17.4%, respectively.

The Middle East (+1.3%) experienced a marked slowdown in air travel as the Ramadan season covered the best part of August reducing travel activity which also had some effect on passenger numbers in other regions such as Africa, Europe and Asia-Pacific.

In the freight market, international freight for the first time since Nov-2009 grew less than 20% significantly down from its 35% peak in May. The Middle East and the Asia Pacific region registered the slowest international growth rates at 10.6% and 17.1%, respectively.

Mr Schimm said: “Total freight growth in August of 15.1% was lower than the 12-month rolling average of 16.6% which indicates a sharp softening of the recovery. The relatively moderate numbers in Asia Pacific and the Middle East which account for half of the international air freight market could point to further slowing of trade.”