North and South American carriers’ stocks gained again on Wednesday (12-May-2010) boosted by an analyst note and gains in the wider market. The Dow (+1.4%) rose on a boost in the technology sector, particularly gains from IBM.

UBS analyst, Kevin Crissey, stated fares for early Jul-2010 are 27% higher year-on-year but early bookings are down 8%, suggesting airlines are expecting a boost in demand from business passengers, who typically purchase fares late. He concluded the revenue outlook for the month is looking up as a result. Full service carriers rose as a result, with Delta Air Lines (+9.3%), US Airways (+6.9%), American Airlines (+5.8%), United Airlines (+4.2%) and Continental Airlines (+4.0%) all gaining.

Market Intellisearch stated Delta’s strong gain for the session pushed it above its 50-day moving average. The carrier reached a three-week intra-day high during trading. The carrier ended trading at USD13.55.

ExpressJet (-0.6%) was the only carrier down on Wednesday, despite reporting a 2.8 ppts year-on-year improvement in load factor for Apr-2010, to 79.5%. The improvement came as the rise in traffic (RPMs), up 24%, outweighed the increase in capacity, up 20% for the month.

ExpressJet ended Apr-2010 with a fleet of 244 aircraft consisting of 206 operating as Continental Express, 22 flying as United Express and 14 flying within Corporate Aviation (charter).  The remaining two aircraft were in modification lines preparing to enter the United Express operation.

The association also estimated fuel costs for the period would rise 20%, to USD2.19 per gallon. 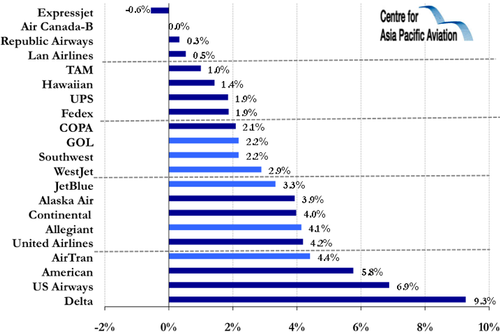