Frontier, upon the release of its Sep-2009 traffic results yesterday, estimated that mainline passenger unit revenue decreased by 12-14% year-on-year in September, at a greater rate than the estimated 11-13% contraction.

GOL’s shares, meanwhile, slipped 2.3% yesterday on concerns that its secondary share sale will lack demand. GOL’s sale of 51.8 million new and existing shares was expected to be priced after the close of trading yesterday.

GOL’s shares have gained 72% in 2009, compared with a 70% advance in the benchmark Bovespa index. 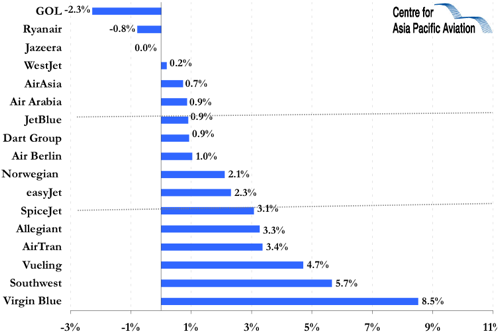 In Europe, Air Berlin's shares gained 1.0%, as TUI Travel announced it would acquire a 9.9% stake in the German LCC through its Leibniz-Service GmbH.

The share acquisition will give Air Berlin EUR33.5 million in fresh capital when the transaction is completed later this month. The proceeds from the capital increase will be used for general corporate purposes.

In other LCC news, OAG stated that the number of worldwide LCC services are up 5.3% this month, with capacity up 5.6%.