Frontier encouraged by its strategy of dodging Southwest in Denver, but looks for new bases

Frontier Airlines believes its tactic to target markets from its main Denver base not served by rival Southwest Airlines remains the best method in fortifying its major hub. But at the same time Frontier is looking to lessen its reliance on a single hub and is exploring new bases, two of which are opening this summer supported by a single aircraft.

Southwest returned to the Denver market dominated by United and Frontier in 2006, and since that time has built its presence at the airport to 159 daily departures to 51 destinations. Based on US Department of Transportation (DoT) data, Southwest had a 22.5% market share at the airport from Feb-2011 to Jan-2012. 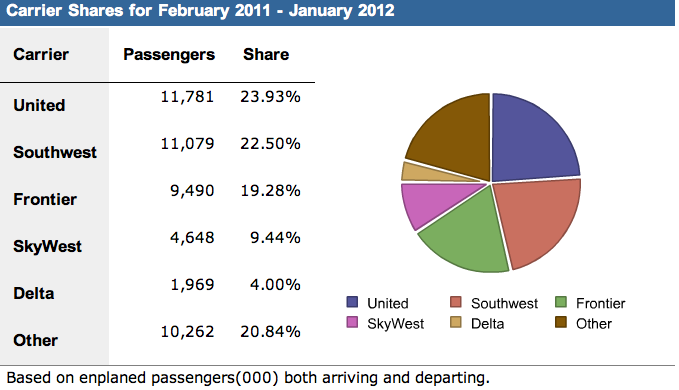 Since Southwest entered Denver, Frontier has adopted numerous measures to combat the increased competition ushered in by its fellow low-fare carrier. In 2007 it debuted a now-defunct subsidiary Lynx Aviation to operate 70-seat Bombardier Q400s to smaller short-haul markets including the Colorado cities of Aspen, Colorado Springs Durango and Grand Junction that were not accessible by Southwest’s Boeing 737s. But after Republic Airways Holdings purchased Frontier in 2009 the decision was made in 2010 to gradually wind-down Lynx’s operations. The Q400 fleet has diminished from 11 to four.

During the last couple of years as the Q400 operation was winding down, Frontier stuck to its scheme of dodging Southwest in Denver by opening routes not served by the Dallas-based carrier rather than compete.

Frontier senior vice president for commercial Daniel Shurz in outlining the carrier’s strategy to analysts explained the carrier has maintained reasonably flat levels of capacity in Denver during the last two years while still opening new markets from its primary hub.

Mr Shurz says Frontier is opening from Denver this summer six new markets not served by Southwest. “That continues a trend we’ve found successful the last couple of years,” Mr Shurz said. In May-2012 Frontier is launching new flights to Cedar Rapids, Iowa and Great Falls, Montana, both of which are served by United with regional jets smaller than the 99-seat Embraer E190s being operated by Frontier. Seasonal flights offered by Frontier from Denver to Bellingham, Washington and Harrisburg, Pennsylvania also start in May, along with new service to Bloomington, Illinois.

Southwest, meanwhile, continues to target Frontier through the launch of flights from Denver to Akron-Canton and Dayton, Ohio beginning in Aug-2012 as part of transitioning AirTran’s flights in those cities to the Southwest brand. Both United and Frontier serve Dayton, while Frontier will be Southwest’s only direct competitor in the Denver-Akron-Canton pairing. Southwest also joined Frontier and United in the Denver-Cancun market when AirTran launched seasonal flights on the pairing in Apr-2012.

Frontier has also ceded the long-time home base of the former Midwest Airlines to Southwest. Republic also purchased Midwest in 2009 and eventually folded the Midwest operation into the Frontier brand. Over the last year Frontier has opted to pull-down the Milwaukee hub and now reportedly will offer just seven daily flights from Milwaukee once a new schedule takes effect on 01-Jun-2012. 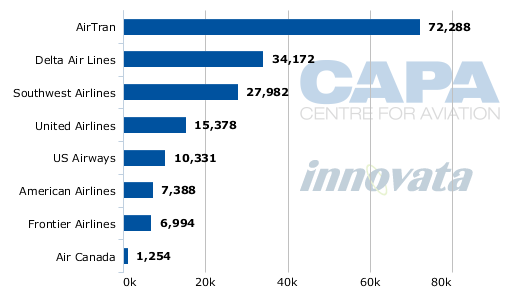 With the redoubling of Frontier’s efforts back to Denver, Mr Shurz is encouraged by favourable capacity trends in the market during the second quarter as overall domestic capacity growth should grow between 0.5% and 1.5%. During the third quarter, Denver’s domestic capacity should fall between flat growth and a 2% increase while same story capacity during the second quarter should drop 1% to 2% but increase 1%-3% in the third quarter. Denver’s main carrier United is shrinking and since the major airline has twice as much capacity in Denver as Southwest, United’s capacity cuts are driving the flat capacity trends.

Roughly 85% of Frontier’s capacity during the summer timetable in the Northern Hemisphere will be deployed from Denver, but Mr Shurz acknowledges that “there clearly needs to be a strategy where we find an opportunity to develop the network in places other than Denver, and we’re working on doing that”. During the summer Frontier is basing one Airbus aircraft in Orlando to support new flights to markets abandoned by Southwest subsidiary AirTran to Bloomington, Knoxville and Allentown and Harrisburg, Pennsylvania. The carrier is also basing a single aircraft in Colorado Springs in south-central Colorado for narrowbody flights to Los Angeles, Phoenix, Portland and Seattle next month.

As Frontier seeks selective opportunities outside of Denver, Mr Shurz concludes that favourable opportunities remain at its primary hub. He also stresses Frontier is not seeing trends in Denver that are particularly troubling in terms of its competitors, which means the main competition in Denver will continue to be spread among three main competitors: Frontier, Southwest and United.