The situation in Hong Kong is playing out elsewhere. According to IATA said recently that global freight markets are expected to remain weak throughout the remainder of the year, although a pick-up is likely in the lead up to the Christmas period.

The past few years have highlighted the financial volatility and the susceptibility of air freight to worldwide economic conditions. The sector witnessed a massive slump in demand in 2008, followed by a sharp rebound in 2009 and 1H2010, before trending to a steady decline from 3Q2010 into 2011. As noted by Cathay Pacific CEO John Slosar in the Aug-2011 edition of staff magazine CX World, the current "financial and economic whirlwind" is a "stark reminder that we can't take anything for granted".

While a pick-up in the lead-up to Christmas is anticipated, concerns remain about the arrival of new capacity, ordered during the pre-2008 boom and occurring amid the introduction of three new widebody cargo aircraft models (the B777F in 2009, the A320-200F in 2010 and the B747-8F this year).

According to The Conference Board last month, US consumer confidence “deteriorated sharply in August, as consumers grew significantly more pessimistic about the short-term outlook. The index is now at its lowest level in more than two years." Indicators measuring CEO confidence and employment trends also weakened.

The European Commission Economic and Finance Affairs similarly stated the Economic Sentiment Indicator (ESI) declined by 5.0 points to 97.3 in the EU and by 4.7 points to 98.3 in the euro area in Aug-2011. "This decline resulted from a broad-based deterioration in sentiment across the sectors, with losses in confidence being particularly marked in services, retail trade and among consumers", it said.

Japanese consumer confidence was steady in Aug-2011 after rising in the previous three months, as the economy continued to recover from the 11-Mar-2011 earthquake, the Japanese Cabinet Office said this month. Concerns centre around faltering global growth and concerns that a strong yen may dampen private spending in coming months.

Meanwhile, Chinese consumer sentiment among households, entrepreneurs and bankers weakened in the most recent quarter, according to a survey by the People’s Bank of China released this month. Concerns focus around the expected monetary-policy tightening by Beijing, with interest rates set to rise in 4Q2011, while income and job expectations also declined.

Cathay Pacific cargo volume down on both 2010 and 2009 levels in Aug-2011; gradual improvement expected over coming weeks

Cathay Pacific last month stated it expects its freight business to slow in 3Q2011 as a result of economic uncertainties. The carrier stated the cargo business performed "reasonably" in the first quarter of the year, but was appreciably weaker in the second quarter. Cathay noted that demand for cargo shipments from its two main markets, Hong Kong and mainland China, was weaker than expected in the second quarter.

Moving into the third quarter and Cathay's overall cargo and mail tonnage showed a significant decline in Aug-2011 compared to 2010 levels. The market from Asia to Europe and trans-Pacific remained weak, though "intra-Asia continued to perform solidly", according to GM Cargo Sales and Marketing James Woodrow. Meanwhile, additional freighter frequencies to Australia were added for Sep-2011 due to strong imports driven by the strong Australian dollar.

Cathay Pacific and Dragonair combined reported a fifth consecutive month of cargo volume reductions. The carriers handled 131,448 tonnes of cargo and mail in Aug-2011, an 11.8% year-on-year decline - to be marginally weaker than the Aug-2009 level. According to Mr Woodrow, "the first half of September overall remained soft as expected, though tonnages should start to gradually improve over the coming weeks." 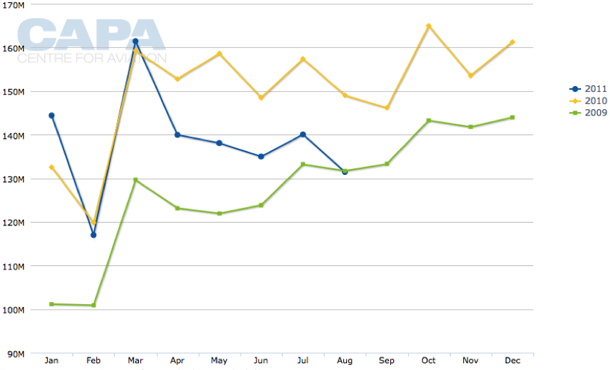 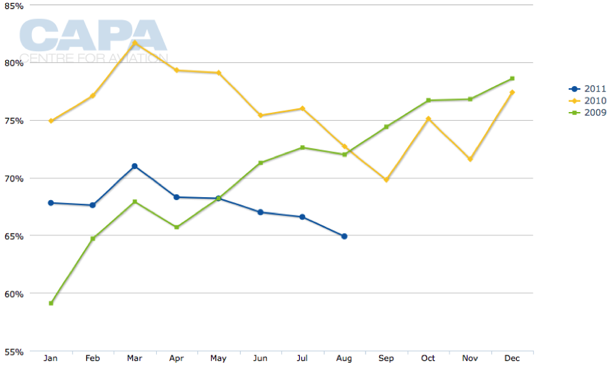 The significant load factor weakness occurred as cargo capacity (available cargo/mail tonne kilometres) increased 1%, marking the 18th consecutive month of capacity growth, compared to a 9.7% reduction in traffic (cargo and mail tonne kilometres flown). Cargo traffic has declined on a year-on-year basis for the past five months, but remains stronger compared to 2009 levels. 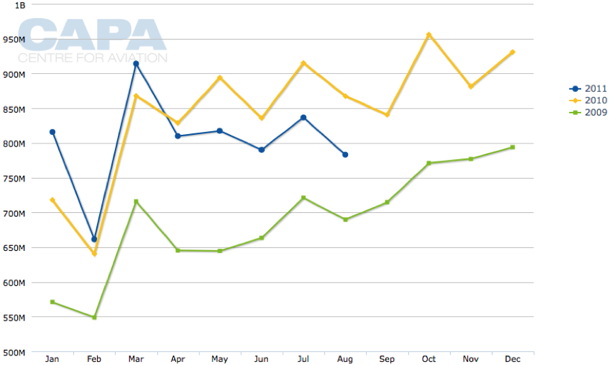 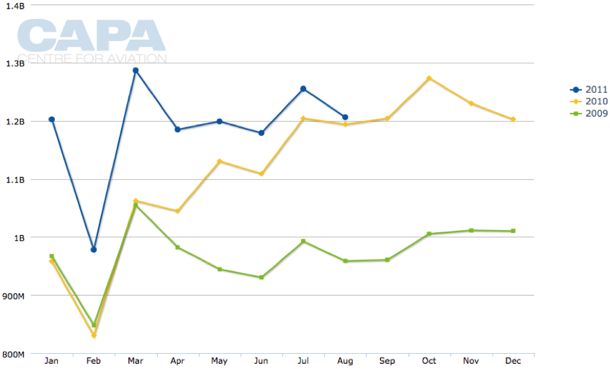 It was however a different story for passenger traffic at Cathay Pacific. Traffic remained strong in the summer peak, with the increase in traffic (RPKs) in line with capacity (ASKs) growth.

The carrier has separately stated that demand for economy class seats was slightly less than expected. Demand for premium class seats remained strong, despite economic uncertainties in a number of world economies. Yields rose in both first and business classes 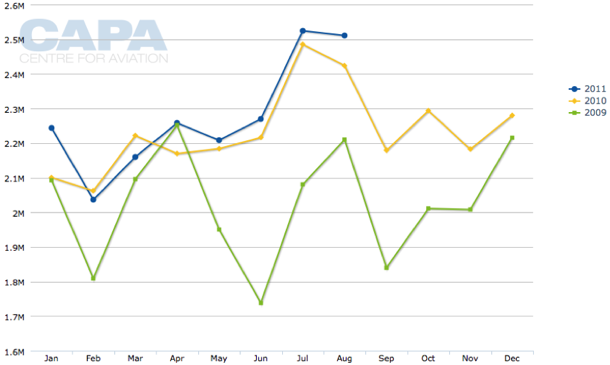 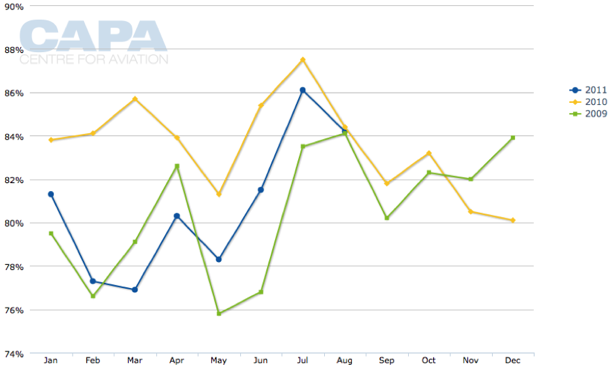 Cathay Pacific CEO John Slosar in late Aug-2011 stated Cathay has no plans to delay new aircraft as Asia is avoiding the worst of the global economic slowdown. The carrier is scheduled to receive eight new aircraft, including five freighters, in 2H2011, followed by 16 new aircraft in 2012. Cathay is “still pretty confident” about the outlook, Mr Slosar said.

Hong Kong International Airport (HKIA) similarly noted a 7.8% year-on-year decline in cargo levels in Aug-2011 to 319,000 tonnes, reflecting weaker economic conditions in the US and Europe. 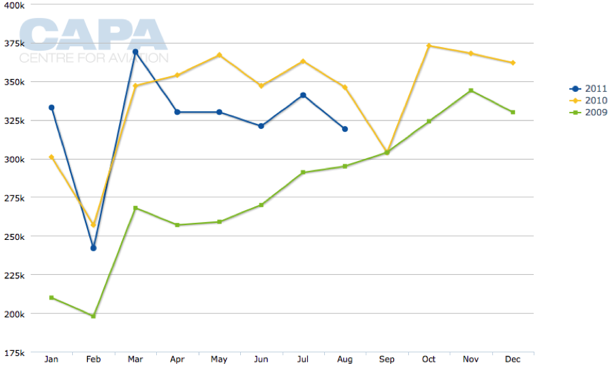 On a more positive note, HKIA reported another busy month for passenger traffic, with passenger traffic and flight movements setting new monthly records in Aug-2011. Fuelled by the burgeoning demand during the traditional summer peak season, passenger traffic continued its upswing, registering a year-on-year growth of 6.5% to a new record high of 5 million. 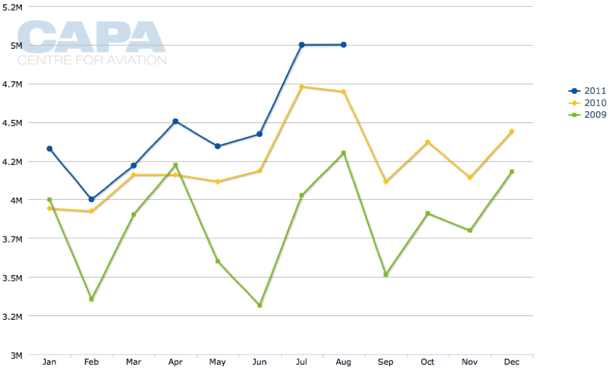 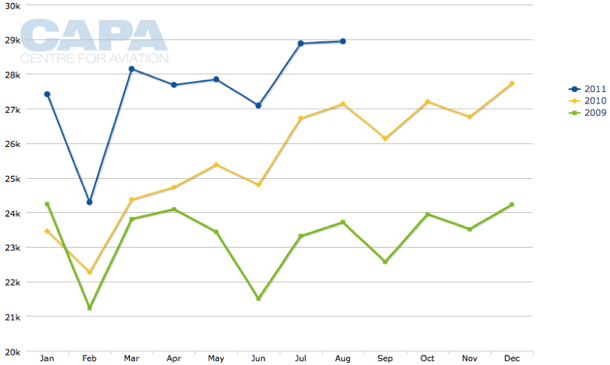 Airport Authority Hong Kong CEO Stanley Hui Hon-chung stated the airport has seen continuous growth in passengers using the cross-boundary transport. During the month, a new high of more than 249,000 passengers used the ferry services at the SkyPier connecting HKIA to eight ports in the Pearl River Delta, which represented a year-on-year growth of 11%. Mr Hui added that the growth momentum in passenger traffic at HKIA would continue as another travel peak is anticipated during the National Day Golden Week holidays.

Commenting on the result, AAT General Manager for Corporate Development, Kenneth Yeung said, “Although export has been affected by the US and European economy, import growth has been more encouraging. Maybe a sign of more balanced trade.“

The positive passenger traffic results in the peak month of Aug-2011 provided some welcome news for Cathay Pacific and Hong Kong International Airport amid an increasingly weak cargo sector. While cargo volumes traditionally pick-up ahead of the Christmas peak, an increasing and continued imbalance between capacity and demand is a challenge for freight operators worldwide. This combination of plentiful capacity and weak export demand from China could spell trouble for cargo load factors, yields and profitability in the months ahead. 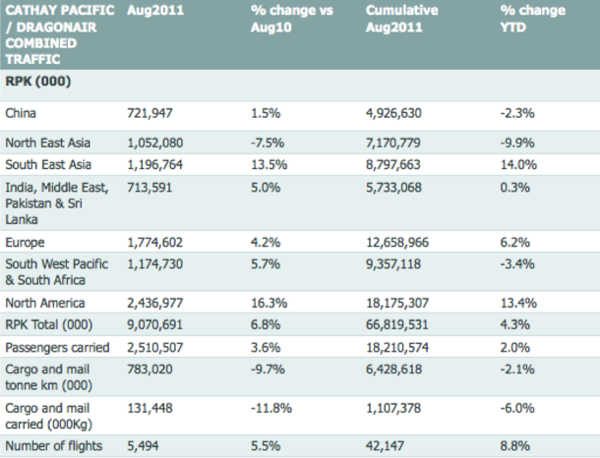 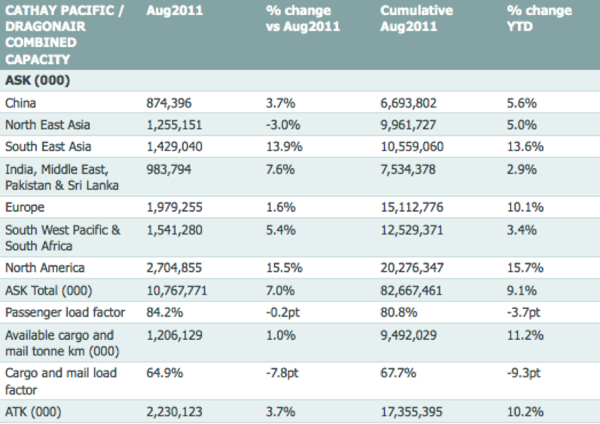 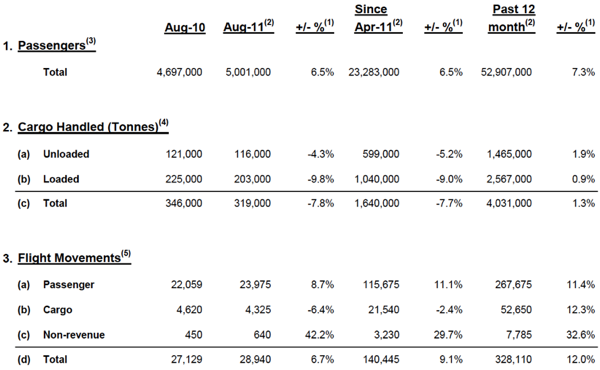