According to Fraport Executive Board Chairman, Dr Sefan Schulte, the Oct-2009 figures indicated that the decline in traffic is "increasingly lessening".

Shares in Italy’s Gemina gained 1.0%, following the release of Aeroporti di Roma’s financial results for the nine months ended 30-Sep-2009, which showed EBITDA easing just 0.7% to EUR191.8 million, despite a 3.3% reduction in revenues.

Also in Europe, Copenhagen Airport’s shares eased 0.3% after reporting its “best month so far this year”. The airport reported a 2.7% reduction in passenger numbers, to 1.8 million, although aircraft movements fell 8.4%:

In the Asia Pacific, shares in Japan Airport Terminal slid 2.3% in trading yesterday, after reporting a 45% reduction in 1HFY2010 net profit and cutting its full year net profit forecast by 44.8%. 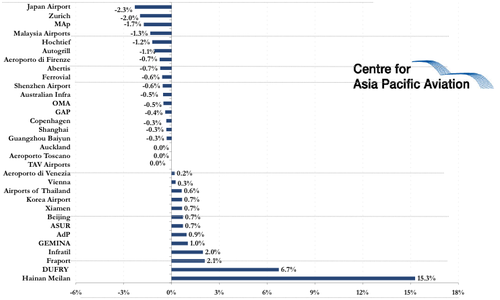