Germany’s Fraport, operator of Frankfurt international airport, saw its share price fall 0.4% yesterday, after reporting a 4.4% decline in revenue and a 33.5% decline in net profit for 2Q2009.

Fraport is feeling the impact of the economic and financial crisis, with group-wide passenger traffic dropping 5.8% year-on-year over the first half of 2009, while Frankfurt Airport registered an 8% drop in passengers. Traffic at Peru's Lima Airport (LIM) went against the trend, up 6.3%, while Turkey's Antalya Airport saw a drop of just 0.5%.

Fraport managed to make major inroads into its costs. Personnel expenses were reduced 12.5% to EUR433.2 million, mainly due to consolidation effects, while non-staff costs declined from EUR318 million to EUR300.3 million, a fall of 5.6%.

Despite the “ongoing curbing effect of the economic crisis on business development in the first half of the year”, Fraport still expects the global downturn to affect the outlook for air traffic development, and has forecast a passenger decline of 6-9% for the full year. Group EBITDA is forecast at EUR500 million to EUR530 million, compared to EUR590 million in 2008. Group net profit is expected be below 2008 levels.

Autogrill meanwhile reported a 4.5% increase in revenue and a 10.1% increase in EBITDA for 1H2009. Its shares gained 3.5% yesterday. The catering and duty free retail company reported an improvement in results during the second quarter, despite unfavourable global economic conditions. Weakness in its airports sector was compensated for by a pick up in motorway traffic in the US and Italy, its two most important markets.

Airports of Thailand was up 6.9% yesterday, after falls earlier in the week. Thai national carrier, Thai Airways, announced it has finalised an agreement with Airbus to defer the delivery of its first three A380s by approximately 12 months, while State Railway of Thailand announced a new airport link between Suvarnabhumi Airport and Bangkok will commence operation in Dec-2009. 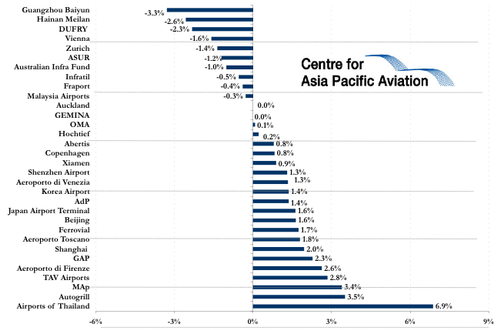