Fraport AG Chairman, Dr Stefan Schulte, announced the airport management group had weathered the global economic storm well and took advantage of the time to implement far-reaching decisions for the future. For the current year, Dr Schulte expects revenue to rise thanks to the "recovery in air traffic and the positive development of the Group's airports", which should result in about an EUR80 million improvement in EBITDA to EUR635 million.

The current outlook is that passenger traffic will grow by 1-2% for 2010. Shares in the company dipped 0.4%.

Dr Schulte meanwhile stated the launch of Frankfurt Airport's new Runway Northwest project is an essential step for the company's future development. The FRA capacity expansion programme, which started last year, is fully on schedule, with inauguration of new runway planned for the beginning of winter 2011/12. Currently, preparations are under way for pouring the concrete of Runway Northwest. Simultaneously, work is progressing on the taxiway bridges that will link Runway Northwest with the airport apron.

The airport is also planning to expand Terminal 1 with a new departure gate. The project includes seven airport building positions for A380 aircraft and three additional apron positions. Under the project, Fraport also awarded Beumer a USD31 million contract to provide the required equipment to extend Frankfurt Airport’s baggage conveying system. The contract requires Beumer to provide a conveying system for Terminal 1 for the transport of outbound luggage in containers. The installation work is to commence in summer 2010 and is expected to be completed in Aug-2012.

During trade yesterday, Fraport’s shareholders also ratified the recommendation of the executive and supervisory boards to pay a dividend of EUR1.15 per share for the last completed fiscal year. For fiscal years 2006, 2007 and 2008, Fraport also paid out EUR1.15 per share.

The full report of these strategic news highlights from Fraport is contained in today’s edition of Airport Business Daily. For the latest strategic news updates on listed and non-listed airports worldwide, including traffic, financial highlights, shareholding and airport development, subscribe today. 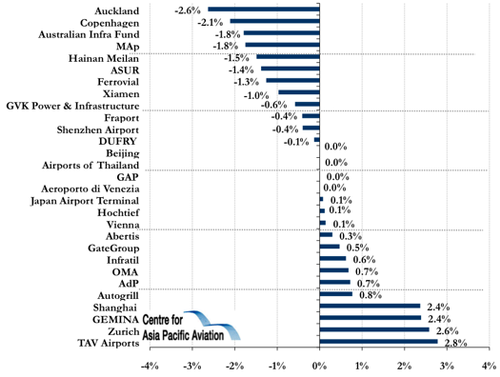