Elsewhere in the region, Korea Airport Services’ shares slipped 3.5%. (See related article: Traffic at Incheon International Airport shows signs that it is getting back on track). 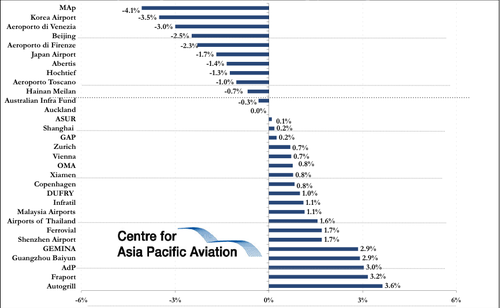 AirAsia stated it is responding to the strong and growing demand from its guests with an additional four weekly frequencies between Kuala Lumpur and Melbourne, bringing its frequency on the sector from seven to eleven times weekly, effective 01-Dec-2009.

AirAsia X Chief Executive Officer, Azran Osman-Rani, stated “despite the difficult economic climate, the Melbourne route continued to show strong growth for AirAsia. Irrespective of a shrinking global aviation market, AirAsia X continues to buck the trend by delivering growth on all of our routes. The Kuala Lumpur-Melbourne route has been particularly popular for us, with AirAsia carrying almost 100,000 passengers since we first touched down in Melbourne on 12-Nov-2008. In fact, the route shows no sign of weakening with strong forward bookings.”

Mr Azran added “these new additional frequencies would also offer passengers better two-way connectivity by reducing transit times when connecting to further destinations to ASEAN and beyond including London and other routes serviced by AirAsia’s growing route network. The increased services will provide better choice to passengers and further enhance our product offering towards the business segment, which values frequency and timing choices.”

Melbourne Airport CEO, Chris Woodruff stated “AirAsia’s entry to Melbourne has stimulated new demand and brought significant growth to the Melbourne – Kuala Lumpur market. This goes to prove the low-fares have helped to attract more inbound travelers and maintain Melbourne as an attractive holiday destination for many.”