Aircastle shares slumped 8.1% yesterday, the largest reduction since 04-Jun-2010, to USD8.34 per share, after the aircraft lessor stated its largest shareholder, Fortress Investment Group, intends to sell 3.9 million shares in the company, reducing its stake to 29%.

Meanwhile, at the other end of the spectrum, shares in Menzies gained strongly yesterday, up 6.5%, as the company’s Board of Directors declared a GBP 0.05 pence interim dividend, to be paid on 26-Nov-2010 for shareholders on register on 29-Oct-2010. 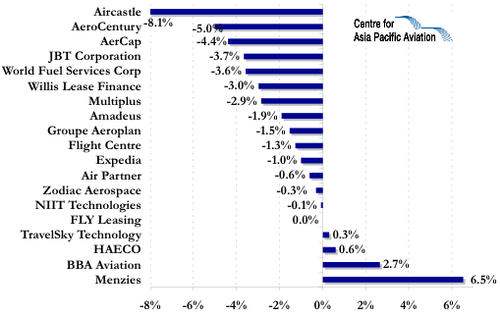 Meanwhile, Australian aviation and aerospace members have established the Australian Association of Aviation and Aerospace Industries (A4I), following an AUD500,000 grant from the Victorian Government.

Australian Association of Aviation and Aerospace Industries Chairman, Mark Ross, commented: “We're really looking at having a voice for our members that will influence policies and regulations that contribute to our ability to compete in a global environment. I've got some experience in Canada and based on that we can do some work here and get good outcomes for the industry. There are a lot of organisations, as you well know, that already function with similar interests. It's not our intent or desire to compete, but rather to collaborate with those organisations and work together to strengthen the sector."

Elsewhere, shares in Honeywell lost 3.4% on more than 2.97 million shares yesterday, with Boeing shares also weaker, slipping 2.1% on over 2.4 million shares. So far in 2010, Boeing stock has increased by more than 17%, with a daily trading average of 4.72 million shares.

Boeing, on 19-Aug-2010, announced that it is expanding its St Louis-area operations with the planned opening of a new manufacturing facility at MidAmerica Airport in Mascoutah.

The facility, tentatively scheduled to open in late 2010 or early 2011, will use leased space in an existing building to house assembly and sub-assembly work. It is expected to initially bring approximately 75 new manufacturing jobs to Illinois. Boeing and St Clair County are entering into a long-term lease for the existing 50,000 sqft facility, which is the first Boeing manufacturing centre in Illinois. 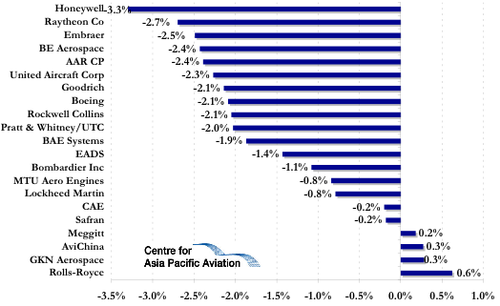