The Globespan Group and Alba Ground Handling Ltd were placed into administration on 16-Dec-2009, with flight operations ceased as aircraft were grounded on the evening of 16-Dec-2009.

The company added that it is likely that other Group companies, including Flyglobespan, will be placed into administration on 17 -Dec-2009, with the UK Civil Aviation Authority revoking the airline’s licence.

PricewaterhouseCoopers (PwC) has been appointed as administrators to the Scottish travel firm, which entered into administration having “suffered liquidity issues”.

Announcing the cessation, PricewaterhouseCoopers’ Joint Administrator, Bruce Cartwright, “despite difficult trading conditions, the company has successfully implemented a number of steps to refine operations and focus on core profitable business. Unfortunately a lack of confidence in the sector following the demise of other airlines resulted in a reduction of liquidity to fund the ongoing operations. The directors have sought to overcome this lack of liquidity by seeking additional funding from a third party in recent weeks but this has ultimately been unsuccessful. The Directors have therefore concluded with regret that the business can no longer continue to operate".

Further Xmas chaos for passengers in the UK

The Group is in contact with approximately 5,000 passengers who are expecting to travel to and from foreign destinations during the coming few days.

UK Civil Aviation Authority (CAA) has also stepped in to protect customers on package holidays, with customers who booked package holidays with Globespan likely to be protected by ATOL.  However, airlines are not included in the ATOL arrangement, so passenger that booked directly with the airline will have to make alternative arrangements themselves.

Flyglobespan stated Thomas Cook, Lufthansa, easyJet, Thomson, Ryanair and Air France would be able to assist passengers, due to overlapping network coverage with the bankrupt carrier.  easyJet and Ryanair have already offered affected passengers special rescue fares where their routes overlap with those of Flyglobespan.

The carrier was, however, a small carrier in the European market, with slightly under 14,000 weekly seats at the time of closure.

Flyglobespan capacity share (seats) by market: Dec-2009 (prior to cessation) 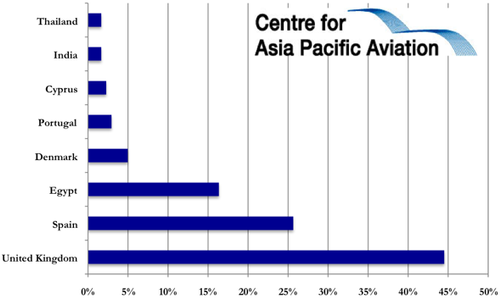 Only a few days ago, Flyglobespan denied reports that it was on the "cusp of collapse", with Founder and Chairman, Tom Dalrymple, stating the company was on the verge of concluding a major funding deal with Halcyon Investments (the investment vehicle controlled by E-Clear).

The Edinburgh-based carrier did not disclose the size of the now-failed deal, but stated the cash would have allowed the firm to "prosper and grow".  The carrier added that it selected Halcyon Investments to provide financial backing after months of negotiations from a number of parties.

From profitability and optimism to closure in less than a year

Flyglobespan was established in 1970 and provided services and package vacations from Scotland's major cities of Glasgow, Edinburgh and Aberdeen to approximately a dozen destinations across Britain (including Manchester, Gatwick and Belfast) and Europe, as well as Orlando, Florida, and the Egyptian resort city of Sharm El Sheikh. Most of the Edinburgh-based company's 800 employees will lose their jobs, with a small number to be retained to help wrap up the company.

IATA terminates 30 airlines in 2009 of which 14 have “disappeared”, but only smaller airlines failing

IATA Director General and CEO, Giovanni Bisignani, in remarks at the Global Media Day on 15-Dec-2009, stated that the association has had to terminate 30 airlines “because they could not pay their bills” in 2009, of which 14 have “disappeared”.

For the time being, it is mostly smaller, lower capitalised airlines which have failed, with Mr Bisignani adding, “I don’t see the threat of major bankruptcies, but smaller airlines have difficulty accessing credit. As a result, they are fragile”.

This echoes similar concerns raised by European Regions Airline Association Director General, Mike Ambrose, earlier this year, who warned that without additional cash, several smaller European airlines would go bankrupt in what he called the worst conditions for the industry since "day one of World War Two".

The following listing has been prepared from a variety of sources, covering over 70 bankruptcies in the past two years, including 46 in 2008 and 26 so far in 2009, according to the CAPA list. It may not be comprehensive, but it does illustrate the growing trend.

Accordingly, Europe has seen the largest number of bankruptcies in the past 21 months, with approximately nine so far in 2009 (including Flyglobespan) and 22 in 2008, with Asia Pacific seeing the collapse of approximately 11 airlines in 2009, after 12 in 2008. The Americas, meanwhile, has seen approximately 15 bankrupt airlines (three in 2009 and 12 in 2008), with eight African airlines ceasing operations in the 21 month period (threein 2009 and five in 2008).