Flybe planning an IPO in London in 2010?

Flybe is reportedly planning an IPO in London in 2010, according to a report in The Sunday Times on 29-Nov-2009. The Exeter-based airline, which has twice delayed its IPO plans, is expected to be valued at approximately GBP300 million.

Merrill Lynch, the airline’s long-standing adviser, has reportedly been instructed to prepare for a listing in 2010, which is likely to be held after the airline’s current full year financial results are published.

While the carrier has not confirmed the plan, it has refused to rule out the possibility of the IPO, with a spokesman stating, "Flybe's business is delivering a robust performance against the backdrop of difficult industry conditions. The directors of Flybe are very pleased with these results and with the numerous growth opportunities which the business has options to action”.

The spokesman added that the carrier, “may consider the possibility of a public listing at some point in the future when the demand for IPOs returns and provided an IPO could be undertaken in the best interests of the company, its shareholders and customers."

Among the beneficiaries of the IPO would be the family trust of Jack Walker (the late Blackburn Rovers Football Club owner), which controls 69% of the business. Chairman and CEO, Jim French (7% share holding), the airline’s staff (9%) and British Airways (15%, acquired when BA Connect was sold to Flybe in 2006) will also benefit from the potential move.

The company has been planning to conduct an IPO since 2005 but two previous attempts were shelved. The most recent, in 2008, was halted because of the global financial crisis.

The carrier now believes substantial value has been added since the takeover of BA Connect.

According to OAG data, Flybe currently has a 28.3% capacity share of domestic UK services, making it the largest domestic carrier by capacity.

UK domestic capacity breakdown by carrier (seats per week* as % of total): Nov-2009 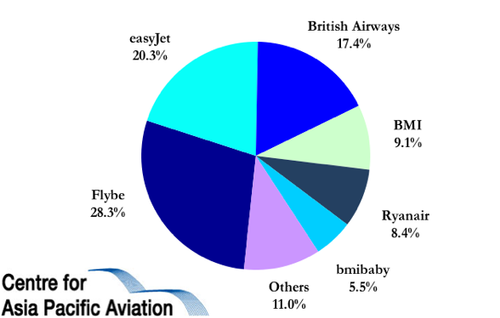 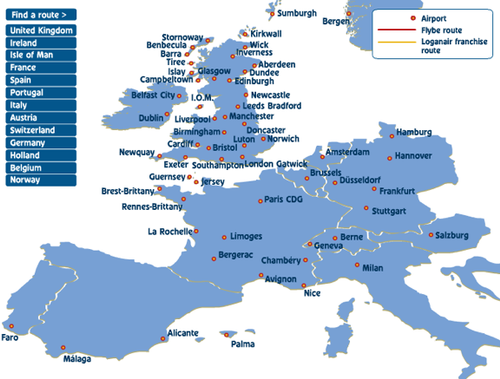 Flybe previously stated it expects to report a profit for the 12 months ended 31-Mar-2009, although the profit is expected to be lower than originally forecast.

However, CEO and Chairman, Jim French, added that the LCC is still expecting “a significant profit” for FY2009/10, as it expects “more carnage this Winter” in the airline industry.

Mr French, attributed the expected profits to the carrier’s “resilient business model”, which has provided it with flexibility to adjust capacity when required.

Flybe one of many carriers planning IPOs

In recent months, a number of carriers, both LCCs and network carriers, have expressed their intention to launch IPOs in the next few years, despite the challenges presented by the current market and financial conditions. Some of these companies are small, young carriers, seeking to raise capital to expand, while others are larger privately or Government-owned companies looking to become publicly traded.