Southwest Airlines' shares rose 0.3% on Friday as the carrier’s outlook was upwardly revised by Fitch Ratings from "negative" to "stable", with Fitch Ratings also affirming the carrier's debt ratings at BBB.

Fitch commented: "The ratings reflect LUV's solid liquidity position, its long track record of industry-leading profitability and free cash flow (FCF) generation, and management's continuing commitment to low balance sheet leverage”, adding: “The revision of the Rating Outlook to Stable reflects the airline's improved margin and cash-flow generation prospects for 2010 and the significant turnaround in the industry revenue environment witnessed during the first months of the economic recovery. After two years of operating challenges, when fuel price volatility and the recession-induced collapse in air travel demand pressured margins and FCF generation, LUV is delivering stronger operating results, and is well positioned from a liquidity standpoint to undertake meaningful balance sheet de-levering through the end of 2011."

In other US LCC news, Spirit Airlines stated its new carry-on baggage fees were implemented on 01-Aug-2010, with the carrier commenting: "The check-in process is going well so far. It looks like this is going to speed things up."

Spirit is charging USD30 at check-in for bags that are too large to fit under the seat, with this increasing to USD45 if paid at the boarding gate. Members of Spirit's special fare club will be charged USD20. Umbrellas, camera bags, strollers and car seats are among the items that will remain free of charge.

Elswhere in the Americas, shares in Brazilian LCC, GOL, gained 3.2% on Friday, as the Brazilian Bovespa Index reported a 10th consecutive session of gains. On the other end of the spectrum, shares in Canadian LCC, WestJet, slipped 3.4%.

Canadian Transport Agency ruled that WestJet's lost luggage policy is "unreasonable”, giving the LCC 20 days to increase its limit beyond the CAD250 per passenger currently in place. If the carrier fails to meet the deadline, the Agency will impose the standard adopted by ICAO under the Montreal Convention, which could amount to as much as CAD1,800 per passenger. WestJet stated it is reviewing the ruling. 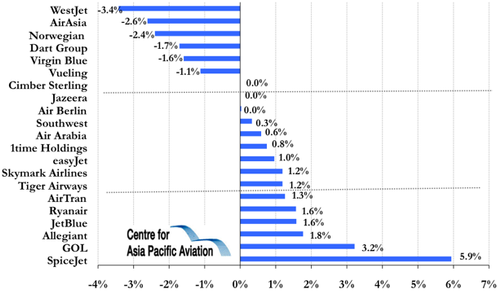