Fitch Ratings stated that global aerospace and defence sector's main credit risks are likely to shift from commercial to defence in the next year.

Fitch stated the improved outlook for commercial aerospace since the start of 2010 is attributed to the "strong rise in airline traffic, improved prospects for airline profitability for this year, alleviated concerns about aircraft finance and fewer cancellations and deferrals to date, particularly in the LCA market", adding that backlogs at Airbus and Boeing "remain high by historical levels".

Fitch added that "other segments of the commercial aerospace sector, such as business and regional jets, have yet to show signs of recovery and may not do so until 2011" while the "aftermarket should improve in the second half".

Fitch also commented that new aircraft manufacturing entrants are "unlikely initially to pose a serious threat" to Airbus and Boeing due to the "competitive advantages Airbus and Boeing have owing to their technological capabilities, existing comprehensive service and maintenance network and greater experience in aircraft program execution".

Shares in Meggitt were 4.0% weaker yesterday, adding to the 4.4% reduction on Tuesday, coinciding with the release of the carrier’s financial results for the six months ended Jun-2010.

The company reported a 6% reduction in revenues and double-digit profit reductions (operating profits down 29% to GBP91 million and profit befox tax decreased 34% to GBP66 million) in the period, resulting in a 39% slump in cash and cash equivalents to GBP855 million. However, the company stated it has seen “early signs” of recovery in its civil markets”, with civil revenues expected to “ return to growth later in the second half on the back of the improving order intake”.

On the other end of the spectrum, shares in GKN gained strongly yesterday, up 6.2%, following the previous days’ 5.5% gain, coinciding with the release of the company’s financial results for the six months ended Jun-2010.

The carrier reported a 25% increase in revenues (to USD2.7 billion) in the period, with a 708% jump in operating profit to GBP202 million. In other positive news, GKN CEO, Kevin Smith, stated civil aerospace orders are likely to grow in 2H2010, due to signs of recovery in the sector, stating: "Global air traffic and airline profitability are up and lease financing has returned, which is now underpinning order books. Our main customers are quite bullish about increased production rates next year and there are new aircraft coming, so I'm optimistic on the outlook." 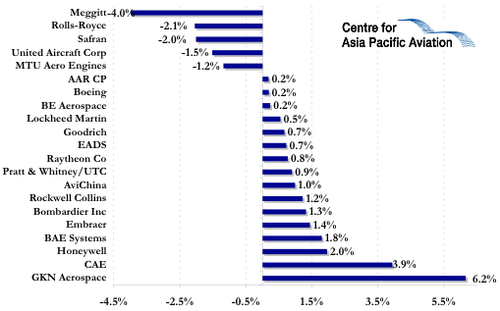 Among the leasing stocks, FLY Leasing shares gained 2.4% yesterday, as the carrier released its financial results for the three and six months to Jun-2010, and echoed comments made by Meggitt and GKN that the outlook for the sector is improving.

CEO, Colm Barrington, said: "We see further positive signs of a recovery in the airline industry, reflected in increased airline profitability as well as rising aircraft values and increasing demand from our airline customers around the world”, adding: "We believe that FLY, with its portfolio of popular commercial aircraft, strong cash flow and significant unrestricted cash reserves, is well-positioned to take advantage of the recovery to return strong value to its shareholders.”

During the Jun-2010 quarter, FLY Leasing reported a profit before tax of USD15 million and a net profit of USD13 million, representing year-on-year reductions of 12.4% and 6.0% respectively, as revenues weakened by 1.7% (to USD63 million).

Shares in World Fuel Services Corp soared yesterday, gaining 13.8%, following the release of the company’s financial results on 02-Aug-2010. The carrier posted “strong results” in the thee months to Jun-2010, with “record aviation volume”, with aviation revenues increased 103% to USD1.7 billion (overall revenues up 74% to USD4.4 billion). The carrier reported an operating profit of USD45 milion (+25%) and a net profit of USD37 million (+33%) in the period. 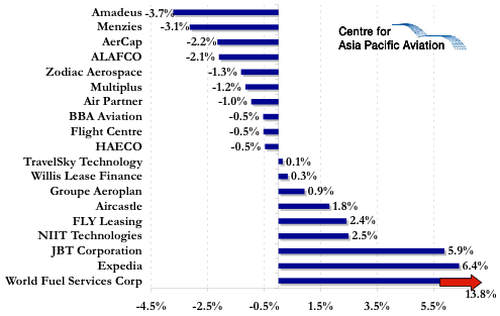