Fitch Ratings has downgraded its Issuer Default Ratings for the Boeing Company and Boeing Capital Corporation (BCC) from A+ to A. The downgrade is driven by the “continued cash flow impact from delays in the B787 and B747-8 programmes”.

Inventory build and other costs from these two programmes have weighed on the company's cash performance for three years, and Fitch expects this will continue in 2011. B787-related assets on Boeing's balance are sheet likely to increase another USD6 billion to approximately USD19 billion. Fitch's ratings actions for Boeing and BCC were:

The rating outlook is stable, reflecting "favourable developments and conditions in other parts of BA's portfolio which have partly offset the impact of the developmental aircraft delays", particularly the recovery in the large commercial aircraft market. The ratings cover approximately USD12.4 billion of debt (USD9 billion at BA, including approximately USD360 million of non-recourse debt, and USD3.4 billion at BCC.

Meanwhile, the WTO final ruling on the EU case against support provided for Boeing is reportedly due early this week. The delayed ruling is confidential and it will be several months before the decision is made available publicly. Airbus is confident that the final decision will follow the preliminary ruling, which it believes indicates that Boeing received “illegal aid”.

Airbus stated earlier this month that aid given to Boeing could result in calls for up to USD45 million in “compensation”, although what form this would take was undisclosed. Against this, the US has estimated that EU aid for EADS/Airbus has resulted in economic damage of up to USD200 billion.

Shares in EADS rose 0.5%, while Boeing shares finished Friday -1.9%. Other manufacturers were mixed: Embraer gained 1.5%, but Bombardier slipped 0.2% and United Aircraft Corp was down 1.4%. 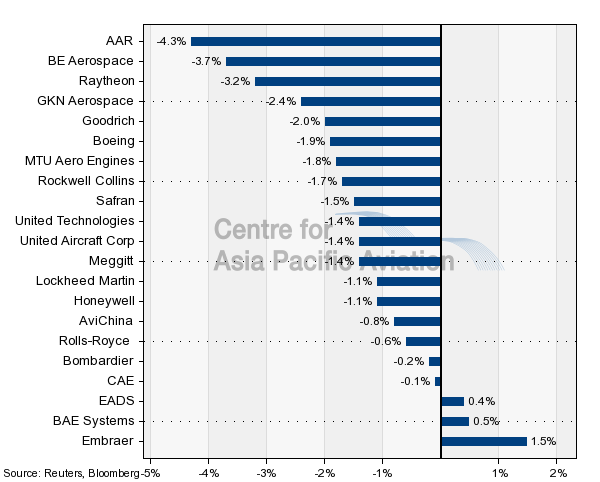