The negative rating outlook for Boeing is related to near-term risks, particularly the manufacturer’s all important B787 programme the “aggressive” production plan for the aircraft. The first flight of the aircraft in Dec-2009 eased some of the concerns related to the programme.

Other concerns related to the programme resolve around the two and a half years of delays that have affected it. Fitch highlights a lack of visibility into compensation claims from suppliers and customers, the large inventory being built prior to certification and the integration of the new Charleston facility into BA's operations. There is still uncertainty about the program's profit margins.

If the B787 programme remains on track or suffers only modest additional delays, Fitch believes 2010 could be the peak of Boeing’s current product development cycle. It could also be the low point of the commercial aerospace downcycle, which Fitch considers to have been moderate.

Also of concern is the deterioration of some of Boeing’s credit metrics, due to the company’s USD5 billion debt issuance during 2009. Declining commercial and defence revenue over 2010 and the draining of cash flow by the company’s B787 and B747-8 programmes have also affected the outlook.

Delays in the aircraft programs over the past several years have negatively affected Boeing’s credit quality, with Fitch considering some of the company’s metrics now weak for the A+ rating.

Other concerns linked to the negative outlook, such as potential production cuts, the aircraft finance market, and US defence budget have eased in the past year. Boeing’s cash performance and liquidity in 2009 were better than expected, but liquidity is forecast to over 2010 due to the building of B787 and B747-8 inventories before the aircraft go to customers.

2010 could be a strongly positive year for Boeing, reaping the benefits of the B787 and B747-8 programmes. Provided everything goes to plan for Boeing, Fitch expects strong revenue growth, substantial cash flow, lower R&D expenses and reduced capital expenditures.

The general improvement in the commercial aerospace outlook also support Boeing’s strong ratings. Boeing plans to lift B777 and B737 production (in 2011 and 2012 respectively).

Meanwhile, Bernstein upgraded Boeing stock from 'Market Perform' to 'Outperform', with the company showing “bullish” potential. Boeing shares were down 0.1% in trading yesterday. 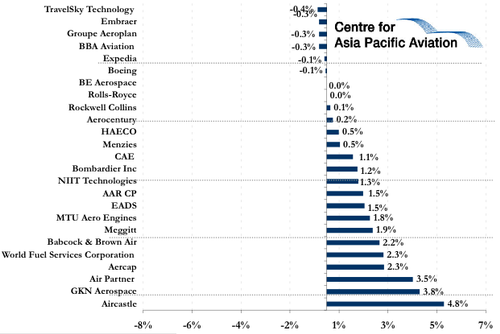