This is the year of Europe’s legacy carriers finally addressing their unsustainably unprofitable short-haul networks, and the answers so far have primarily been to strip costs out of existing models to make the carriers competitive against low-cost rivals. But Finnair’s decision to outsource its short-haul flying to a joint-venture partner suggests hybrid models can only achieve so much savings, while the structure of legacy carriers has inherent higher costs that cannot be taken out. Starting afresh becomes another, better, solution.

And a tabula rasa today in Europe, or at least Scandinavia, cannot be used to launch a hybrid carrier, Finnair CEO Mika Vehviläinen tells CAPA. Rather, when Finnair’s new short-haul operation commences in 1H2013, it must be “ruthlessly” low-cost, Mr Vehviläinen said. Yet this poses quandaries for Finnair’s business model of efficiently linking Europe with Asia as long-haul passengers, premium in particular, will be subject to LCC-style service on onward connections.

With Air France-KLM planning LCC expansion to salvage its unprofitable short-haul network and Iberia attempting to introduce something with more frills, Europe’s legacy carriers appear to be diverging between no-frills and hybrid models. One size does not fit all – but the bottom line is the bottom line.

Having a fitting strategy is critical; 72% of Finnair's seats and 36% of available seat kilometres are short-haul. Finnair announced in Feb-2012 its intention to have a JV partner take over its short-haul network.

For Finnair, the worst is yet to come

Scandinavia's legacy airlines, as in other corners of Europe, have been hit hard by low-cost carriers. In Finnair's region are Norwegian Air Shuttle and SAS’ Blue1, between them accounting for 20% of seats in Finland compared to 55% from Finnair. But unlike most of the rest of Europe, where legacy carriers are primarily responding to the LCC capacity already in the market, Finnair is also preempting forthcoming large-scale LCC expansion. SAS Group has been significantly cutting costs across the group. Despite easyJet’s withdrawal from Helsinki, Ryanair is bullish on the region and has openly talked of significant expansion in Scandinavia. Worse still, Norwegian recently placed an order for 222 narrowbodies, many of which will be used to open new bases, but also has its first two Boeing 787s for delivery in 3Q2012, with up to another six to come, setting it up nicely to compete with the established network airlines on long haul as well.

LCC penetration rates are low in Finland – 15% in 2011 – compared to elsewhere in Europe, OAG data shows. So there is room for movement.

In these circumstances, Finnair dominates the national market. A more traditional – even ruthless – LCC model seems justified in Finland, but equally a consideration is that the hybrid models primarily being explored by Air France, airberlin, Iberia Express and Lufthansa are so far unproven for the short-haul European market. The ground is moving underneath these hybrid "experiments" even as they are being introduced. 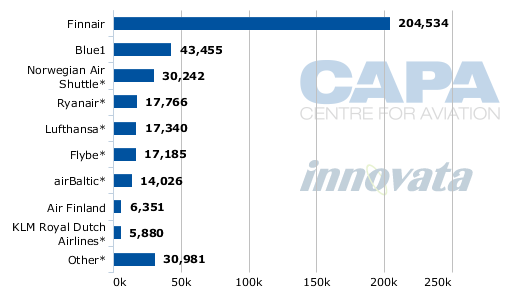 Europe’s hybrid experimentation not yet proven

Iberia Express may fare better, but only because it is closer to being a LCC than the others. In fact, it could be seen to be a LCC were it not for management pointedly not calling it a LCC, or for some scheduling inefficiencies that arise out of the carrier’s need to support its parent airline’s Madrid hub. airberlin has adopted a hybrid model via a relatively unstructured routing, but has yet to see revenue increase and surpass the costs inflation that went into becoming a hybrid carrier. To counter airberlin, Lufthansa is looking to deploy at Berlin newer A320s with reduced maintenance needs as well as to use locally-based crews, further reducing costs. Air France had planned to expand from secondary cities, but then scaled back on that plan and most recently announced intentions to expand its Transavia LCC unit based in Amsterdam.

Mr Vehviläinen has surveyed the options and determined low-cost, not hybrid, is the way forward for his carrier. “That’s the way short-haul is going,” he told CAPA. “As a starting point you need to have absolute low-cost as possible because the low-cost and point-to-point flying is today very price sensitive so it’s very important that whatever you do you’re basic starting point is low-cost.”

Finnair in recent times has moved to a strategy of linking Europe, as well as North America, with Asia. Finnair’s Helsinki hub is directly on the flight path between Europe and Asia, north Asia in particular. The geographic advantages are even stronger than the big Middle East three offer, although Finnair lacks scale compared to Emirates, Etihad and Qatar.

O&D traffic to Helsinki is limited, so Finnair’s new short-haul carrier will have to accommodate connecting premium passengers. Mr Vehviläinen intends to keep differentiation factors – “add backs” – limited to keep costs in line. He is considering services for premium passengers like complimentary meals and drinks and blocking the middle seat. (Finnair does not have dedicated business class seats on its short-haul network.) The blocking of middle seats is not new, but it has evolved. Many airlines started with a hybrid set of seats at the front of the cabin in which part of the seat back of the middle seat could be folded down to create a workstation. Now some carriers are preferring regular economy seats to avoid added weight of the middle seat workstation.

“You separate them and do a distinct product for the premium passengers, but the starting point has to be a ruthlessly low-cost production capability. Then you can add back, but if you try to do a hybrid model from the start, if you try to compromise, that’s not the right approach,” Mr Vehviläinen said.

While Finnair’s model is to make it more attractive for point-to-point traffic, the lower cost of short-haul flights could make its long-haul flights more competitively priced. Finnair serves 10 destinations in Asia, including three in Japan and two in mainland China. Mr Vehviläinen said future expansion would likely see preference to new points rather than increased frequency to existing destinations, although in the Northern Hemisphere summer Finnair is due to increase services to Tokyo Narita to 10 weekly, up from daily.

“I believe it will be more competitive in point-to-point traffic and being competitive there opens possibilities to do feeder traffic as well,” Mr Vehviläinen said. 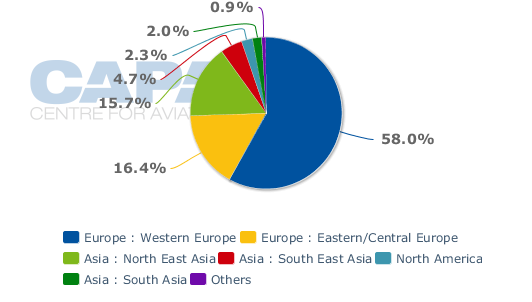 Joint ventures have flourished in recent years, linking the US with Europe, US with Australia and US with Asia, but Europe-Asia JVs are still new. Lufthansa and All Nippon Airways (ANA), both part of Star Alliance, have an agreement while British Airways and Japan Airlines (JAL) in Feb-2012 announced their intention to form a JV.

JAL also announced that as part of its strategic plan to have more long-haul flying as LCCs infiltrate short-haul markets it will launch services to Helsinki in Mar-2013 with four weekly 787 services, rising to daily in Jul-2013. “Helsinki is the entrance to Europe and functions as a hub for European cities,” JAL said when announcing the route.

Mr Vehviläinen said JAL’s dependence on Finnair’s short-haul network from Helsinki, as well as the two carriers operating upwards of three daily flights to Toyko (Finnair also operates daily to Nagoya and Osaka) could lead to the formation of a JV or joint business agreement (JBA) between the two carriers. “This kind of JBA arrangement in place over the Atlantic is likely to become more popular in Asia-Europe. We’ve seen the Lufthansa-ANA arrangement and Finnair is quite interested in looking at a similar solution for ourselves as well.” 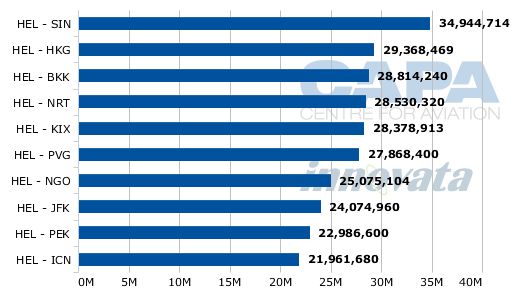 Some softening in regional competition

While Finnair still sees heavy LCC presence in its short-haul market, competition has softened due to some carriers exiting the Helsinki market. The Feb-2012 collapse of Hungary’s Malev has given Finnair a small uptick (even though Malev was a fellow oneworld member, the two competed, as is the case for almost any partnership or alliance except where there is metal neutrality). The collapse of Spanair in Jan-2012 gave Finnair an uptick in its Barcelona route. A larger significance, Mr Vehviläinen said, has been SAS retreating from European destinations served from Helsinki.

While Helsinki will soon see the entrance of Qatar Airways (exact schedule to be announced) with flights to Doha, Mr Vehviläinen expects Qatar to pose little threat given Finnair’s geographic advantages over Doha. “If I look at the flying to Asia, we have so much more direct routes.”

Cooperation between LCCs and full service carriers to grow

With a strictly low-cost operation and a full service network carrier, Finnair will join a handful of carriers that have two very distinct operations. The crux of such relationships is how to connect the two and have each benefit the other. This trend – with inherent challenges but revenue growth potential – will only grow, and do so globally. India’s Jet Airways recently inked a deal with Singapore-based Jetstar Asia for Jet to sell Jetstar flights.

At the time of the announcement the two had fully worked through details, overcoming inertia that has limited such cooperation spreading. Jet Airways passengers would receive complimentary luggage allowance on Jetstar flights, and for longer services a meal and amenity kit too. The Jet Airways and Jetstar deal has many of the hallmarks of what Finnair aims to achieve: a successful point-to-point short-haul carrier that can benefit long-haul flights and vice-versa.

There are signs other carriers, like Air France, will join Finnair in having a LCC. Iberia effectively already does with Iberia Express in all but name. With the exception of Barcelona-based Vueling, profitably successful hybrid carriers in Europe are rare. They can offer higher returns than a LCC or full service carrier, but for Europe’s legacy carriers that have been in crisis over their unprofitable short-haul markets, they may be running out of stamina to create a unique solution instead of replicating their successful low-cost competitors.