Shares in Finnair gained 0.8% yesterday, despite further flight cancellations, due to the strike by ground handling staff.

Finnair was forced to cancel approximately 23 services yesterday, following 25 cancellations on Tuesday, affecting up to 6,250 passengers so far. The carrier, on 30-Nov-2009, announced plans to outsource approximately 490 employees at its ground handling company, Northport, to the Barona Group for its baggage and apron services at Finland's Helsinki Vantaa Airport. In addition, 130 cargo terminal employees were to be transferred to the service of Suomen Transval Oy.

Elsewhere, Air France reportedly plans to renegotiate working conditions with pilots and cabin crew as part of a drive to restructure its European network and boost profitability by EUR120 million, according to reports in Les Echos. Shares in the Air France-KLM Group rose 1.6% yesterday. 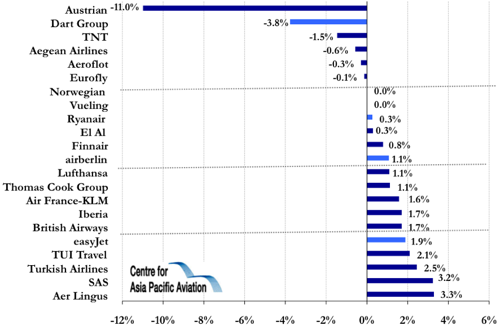