Finnair (+0.6%) rose marginally on Thursday (28-Oct-2010) after reporting its first profitable quarter for 3Q2010, after seven successive loss-making quarters. The carrier reported a profit of EUR32.4 million for the quarter, compared with a loss of EUR18.1 million in the previous corresponding period.

The carrier now expects passenger and cargo demand to continue to be strong in its market due to the strengthening of national economies and subsequent export industry growth. It stated the demand base provides an opportunity to improve unit revenues from the previous year.

Finnair aims to maximise total revenue, which is expected to maintain the passenger load factor at the previous year's level or to reduce it slightly. Correspondingly, unit revenues are expected to be significantly higher than last year.

4Q2010 is expected to be profitable but due to seasonal fluctuations of demand and sales significantly weaker than 3Q2010.

Lufthansa CEO Wolfgang Mayrhuber stated that “after a bumpy start to the year, we accomplished a remarkable comeback and have now reached cruising altitude far more quickly than could have been expected. The recovery of the market has helped us to record positive results in all of the business segments”.

As a result, Equinet raised its price target for the carrier from EUR15 to EUR20, with a "buy" rating.

British Airways (+1.0%) gained after Bloomberg reported analysts on average expect the carrier to report net income of GBP164.8 million for the three months ended 30-Sep-2010, compared with a loss in the previous corresponding period. 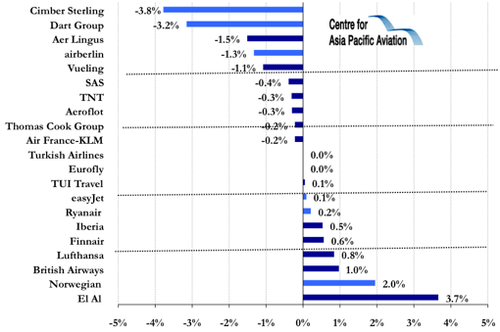