Finnair (-3.9%) shares slumped in another day of mixed trading for European airline shares on Tuesday (07-Dec-2010), despite European markets climbing to the highest level in more than two years. Finnair was down after news mediation to end the eight-day strike by its cabin crews broke down on 06-Dec-2010.

The carrier cancelled a further 180 services on 07-Dec-2010 as a number of unions launched supportive strike actions against the carrier in support of the strike by the Cabin Crew Union. Transport Workers' Union ceased delivering fuel to Finnair aircraft, while other unions took measures that will affect catering, check-in services, ground handling, de-icing, cargo and postal services.

On 07-Dec-2010, the Finnish Aviation Union (IAU) announced it expanded the list of Helsinki Airport services it would deny the carrier to include maintenance, repairs, and inspections of the company's aircraft. British Airways is among 10 carrier that will be affected by the 07-Dec-2010 announcement.

Since the strike began on 30-Nov-2010, more than 1400 services have been cancelled, affecting more than 74,000 travellers, with 40% of its scheduled flights operated. The carrier says it will be able to operate on some routes with Director of Communications Taneli Hassinen confident "the situation would be reviewed in a couple of day’s time".

Air France-KLM to cut flights from Paris CDG on Wednesday

Air France-KLM (-2.2%) also declined after Air France confirmed it will operate all its long-haul flights to and from Paris CDG, but some domestic and European flights will be cancelled due to severe weather. French Civil Aviation Authority (DGAC) has reduced the number of flights permitted at the airport for 08-Dec-2010 in consideration of the conditions forecast for Paris.

Also during trading, Air France-KLM reported a 1.1 ppt year-on-year improvement in load factor for Nov-2010, to 79.1%. Passenger numbers were also up, rising 4.7% for the month to 5.7 million. The group added unit RASK excluding currency was up year-on-year. 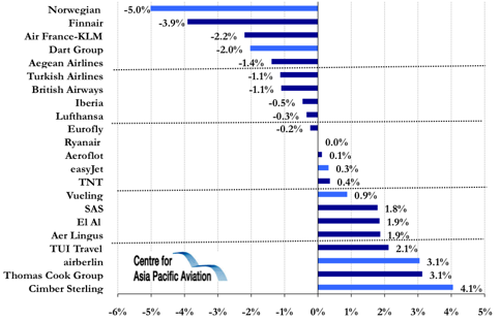