IATA shows weaknesses in recovery of traffic in region

IATA reports that European airlines saw the weakest first quarter growth in air travel of all regions worldwide, at +4.3%, and in air freight, at +10.3%. This reflects the relative weakness of the European economies. North American growth was also weak. Unemployment is high and consumer confidence is relatively low in both regions. IATA added, "there is a lot of public discussion about budget cuts and tax increases in the near future in both regions which may also be dampening the growth of air travel demand".

The weak growth is partly the result of ongoing capacity restraint by European airlines. ASKs fell 0.8% year-on-year in Mar-2010. 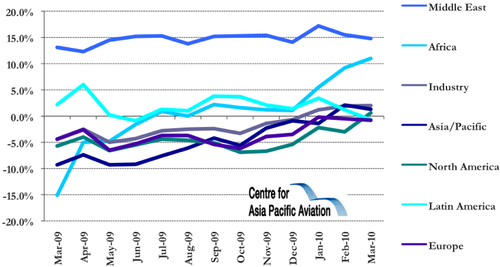 Finnair (-3.4%) shares were down after the carrier cautioned that its second quarter results are expected to be "clearly worse than the first quarter", ahead of an expected turnaround later in 2010. Finnair reported a net loss of EUR21.7 million for the three months ended 31-Mar-2010, compared to loss of EUR18.6 million in the previous corresponding period, with revenues decreasing 7% year-on-year to EUR481.5 million.

However, in Mar-2010, revenues increased for the first time since the global economic downturn began in 2008 reflecting a 20% increase in overall demand (passenger traffic reached 1.8 million, with Asia traffic increasing 10%). CEO, Mika Vehvilainen, stated the carrier will "continue to carry increasing passenger numbers because business travel in Asia and Europe is on the rise."

The carrier added that it had begun to see signs of a slight recovery before the European airspace closures forced it to cancel more than 1,700 flights and 140,000 bookings, costing an estimated EUR20 million. Finnair stated that most of its targets from its EUR200 million cost improvement have been recognised, with the majority of the programme implemented.

Vueling down with wider market

Vueling (-5.7%) took another big fall, after Standard & Poor's downgraded Spain’s debt rating from ‘AA plus’ to ‘AA’, with a negative outlook. The analysts stated a longer than expected term of low growth could undermine the country’s efforts to decrease its budget deficit. Spain’s IBGM fell 3.1% as a result. 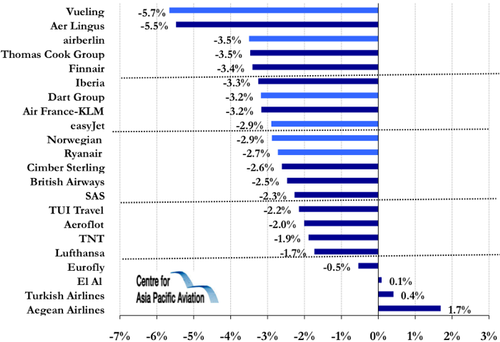