Finnair (-1.0%) fell with the majority of other carriers on Tuesday (30-Nov-2010) after Finnish cabin crew union SLSY commenced strike action involving Finnair and Blue1, after efforts to resolve the issue of night shift and days off, failed on the evening of 20-Nov-2010.

Most of Finnair's 2000 stewards are participating in the strike, with the carrier forced to cancel more than 100 domestic and international services on 30-Nov-2010, affecting approximately 6000 passengers. The Finnish Aviation Union the IAU declared a sympathy ban on overtime work to coincide with the cabin crew strike.

Finnair expects a direct net loss of EUR2 million to EUR2.5 million per day during the strike. CEO Mika Vehvilainen stated he is “forced to consider significant structural changes”, with the company planning to look into options including outsourcing operations, hiring labour from countries with more favourable labour contracts, and ceasing some European routes. Mr Vehvilainen expects to see a 2010 loss for Finnair, which had been forecasting its first full-year profit since 2007.

Aegean Airlines (-4.2%) suffered the biggest decline of the day after Olympic Air CEO Thanos Pascalis stated Olympic may “possibly” be in trouble, due to Greece’s economic issues. The CEO stated passenger numbers for the carrier are down, with competition also a problem on key routes. Mr Thanos stated the only way for Olympic to survive will be through its proposed merger with Aegean Airlines, which is still being investigated by the European Union. The EU is expected to give its decision on 12-Jan-2011.

In the UK, flybe confirmed plans for an IPO to fund aircraft acquisition and support growth plans, which includes expanding codeshare arrangements, entering strategic agreements and potential acquisitions. Europe’s largest regional airline will seek to raise GBP60 million in listing on the London Stock Exchange in Dec-2010, which would see the airline valued at GBP240 million.

Elsewhere, Cimber Sterling (+2.9%) and Turkish Airlines (+2.6%) were among the minority that gained for the session. 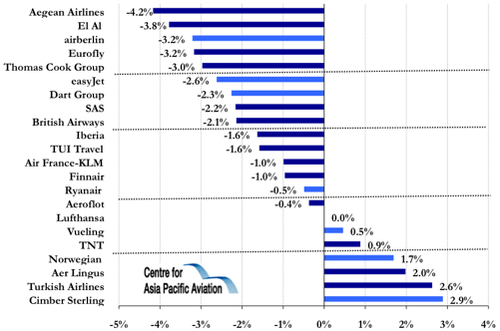