Spanish construction company, Ferrovial’s shares rose 1.9% to EUR32.50 yesterday following reports that BAA is close to finalising a deal with a consortium led by Global Infrastructure Partners for the sale of London Gatwick Airport, for between EUR1.65 billion and EUR1.8 billion.

BAA owner, Ferrovial hopes to finalise the deal before a UK competition hearing on 19-Oct-2009, which will look at BAA’s airport ownership.

Elsewhere in Europe, shares in Fraport, Aeroports de Paris and Zurich Airport fell 1.1%, 1.1% and 4.7%, respectively. Zurich Airport’s shares surged in the previous trading day in response to an announcement that it plans to reduce its shareholding in Bangalore International Airport Ltd from 17% to 5%.

OMA traffic decline ahead of GAP and ASUR 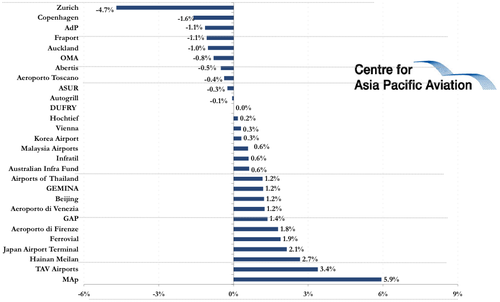